On the ninth night after the Spring Festival, it began to snow.

The second morning, the earth was likely to be covered with a thick quilt. The small trees bent down, and we could not see the paths but snow. What a beautiful snow world!

The most excited ones would be our children. “Mom, Dad, look! It snowed heavily last night! Oh, beautiful snow!”  Mother suggested tomake a snowman together after lunch. They all agreed this great idea. They had a quick lunch because they were so eager to go outside to make a snowman. Jinzhong was the first one to rush out. “So what are we going to take if we want to make a snowman?” asked mom. Little Jinzhong thought a little bit and got a plastic shovel, at the same time, Jiewei fetched another shovel, Yixiao got a dustpan. Our youngest son Hejie approached the dustpan as quickly as he could. But Yixiao was so swift that he didn’t give Hejie any opportunity to touch it. Hejie almost burst into tears. Mom found out a torn pan and just made him stop crying. Meanwhile, the father took out our big spade. The whole family were well-equipped to build a snowman! 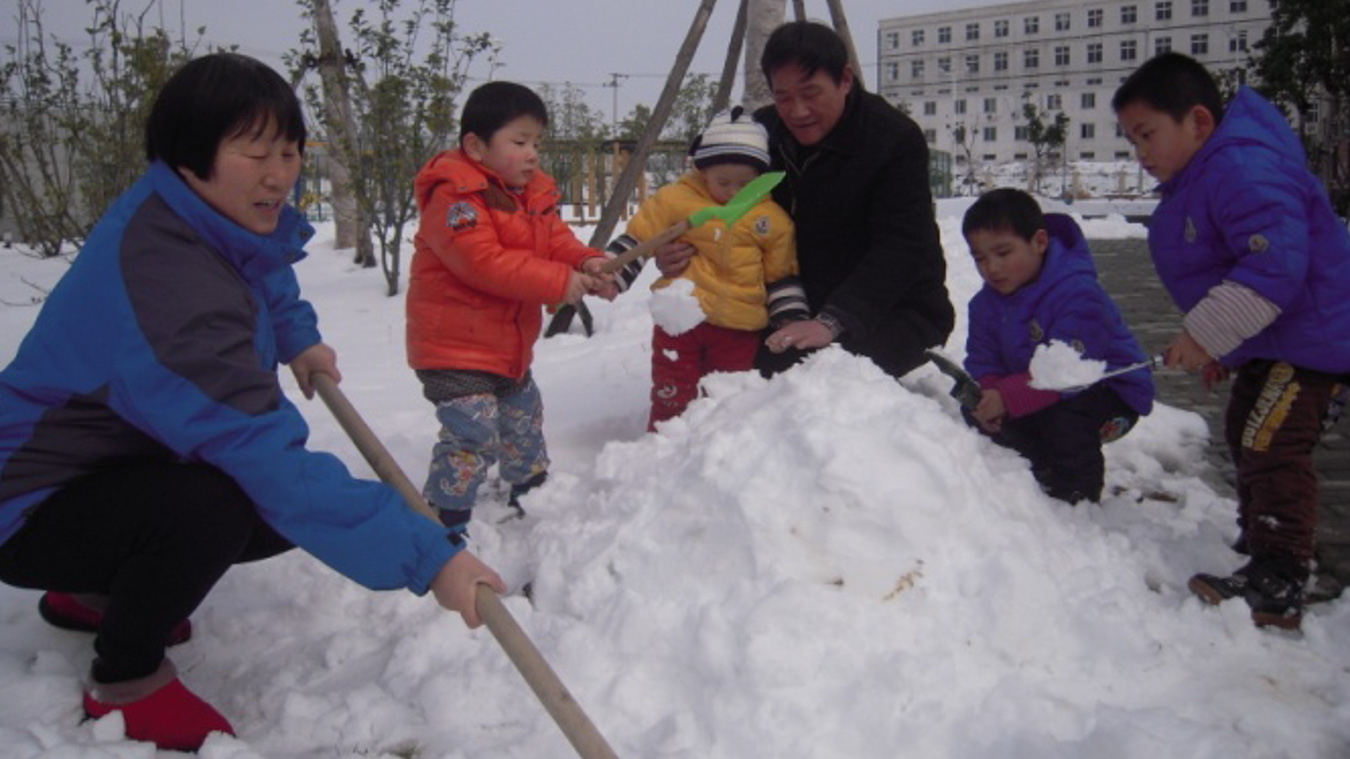 Jiewei was so eager to shovel the snow as he just came to the outside. He shoveled here a little and shoveled that a little. Yixiao also followed his lead and began to shovel. Father gave them advice, “we will not be able to build a snowman if we shovel like you guys. Come on, follow my lead!” He shoveled with the spade and put all snow together, then he continued to say, “see? We need to make the body first, then a head, and make ‘clothes’ for him. Got it?” After their father’s instruction, all the kids stopped shoveling randomly but began to follow his father. Everyone had their own job and the production of a snowman was in full swing. We completed the body of the snowman just in a while. Mother said “it is the time for the head part!” she made a small snowball. Jiewei came to help make it bigger and bigger. They put the ball on the body. Okay, a snowman just took shape! “Mom, Mom, he does not have eyes and nose yet!” Jinzhong asked, tilting his head, “so what kind of stuff can we make into his eyes and nose?” They looked each other. Mom took out a carrot, two black balls and some colored pens, just like a magician. This stuff inspired them. “The carrot is his nose, and the two balls are eyes!” they answered unanimously. They drew a red mouth for the snowman. They were glad to clap hands together when they saw their production.

Jiewei helped the snowman tie his own neck scarf. Yixiao took off his cap and put it on the snowman. See, a snowman was just shown before us. We were singing happily around him!

Where is the Snowman?