Not all children who spend their days in China’s welfare institutions are orphaned.

When Yuli and her little brother Yuping’s parents were sent to prison, no relatives stepped up to care for them, and so they  arrived at the orphanage. Children belong in families. An orphanage, no matter how well run, is never a good place to grow up—but especially not for children who have only known family life. Until they were able to join OneSky’s Loving Families program, Yuli and Yuping had a difficult time.

When the siblings first arrived at the institution they were inseparable. Yet as they spent more and more days apart, grouped with orphanage children their own ages, they became increasingly distant with one another. Yuli especially began to pull away from her brother. 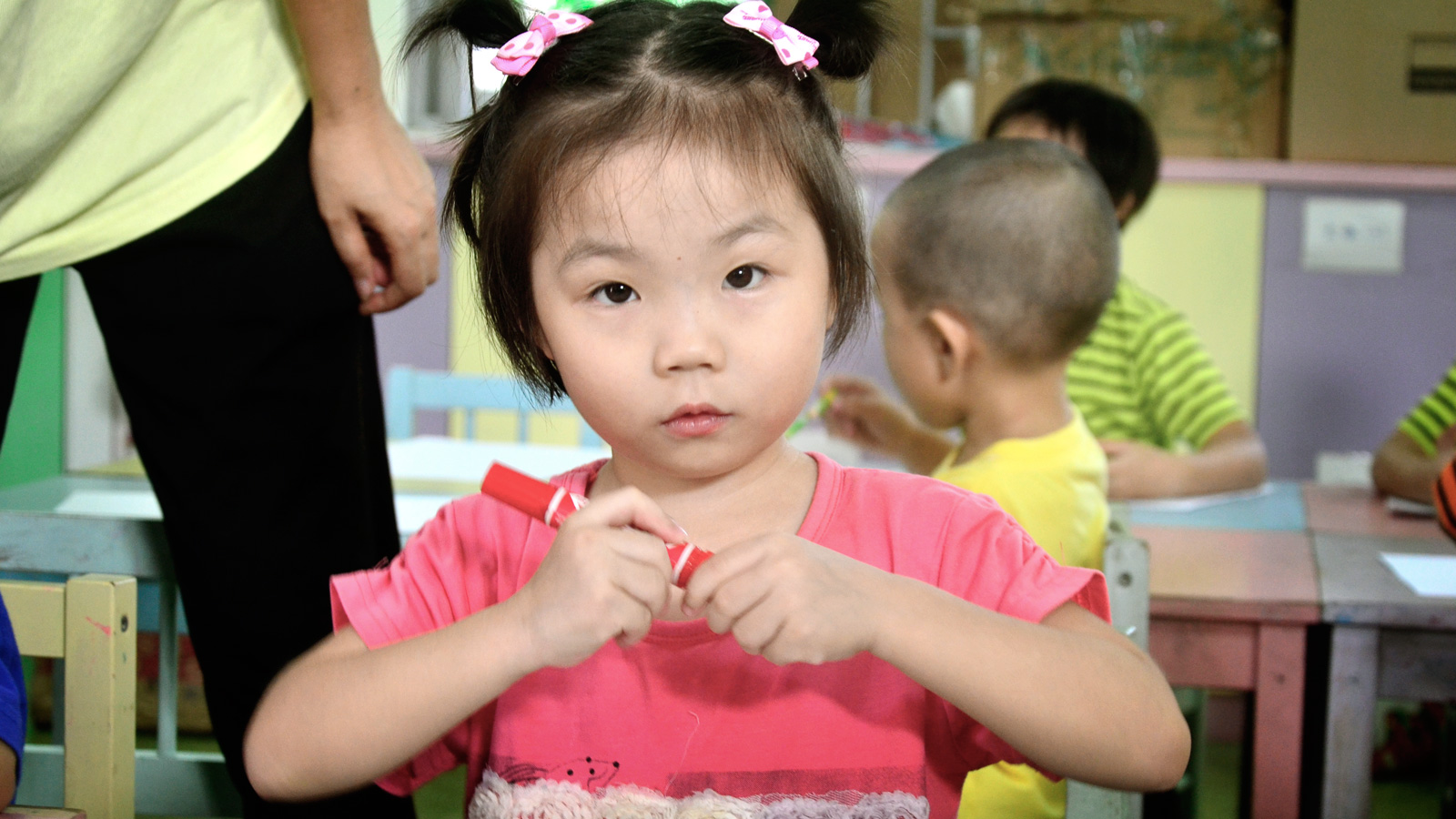 “We could see that her estrangement from her brother was growing deeper and deeper,” said Yuli’s OneSky preschool teacher.

Yet, unlike a lot of her peers at the Guangzhou orphanage, who have no memory of ever having a mother or father, Yuli not only remembered her parents—she did so happily.

“I once lived by the riverside with my mom, dad, and little brother. I went shopping with my mom and she would buy me nice food…but one day mom and dad did something wrong and got arrested by police,” she told Teacher Huang.

Yuping, meanwhile, was often ill and anxious, constantly looking for his big sister. Unlike her, he never mentioned his former family life. 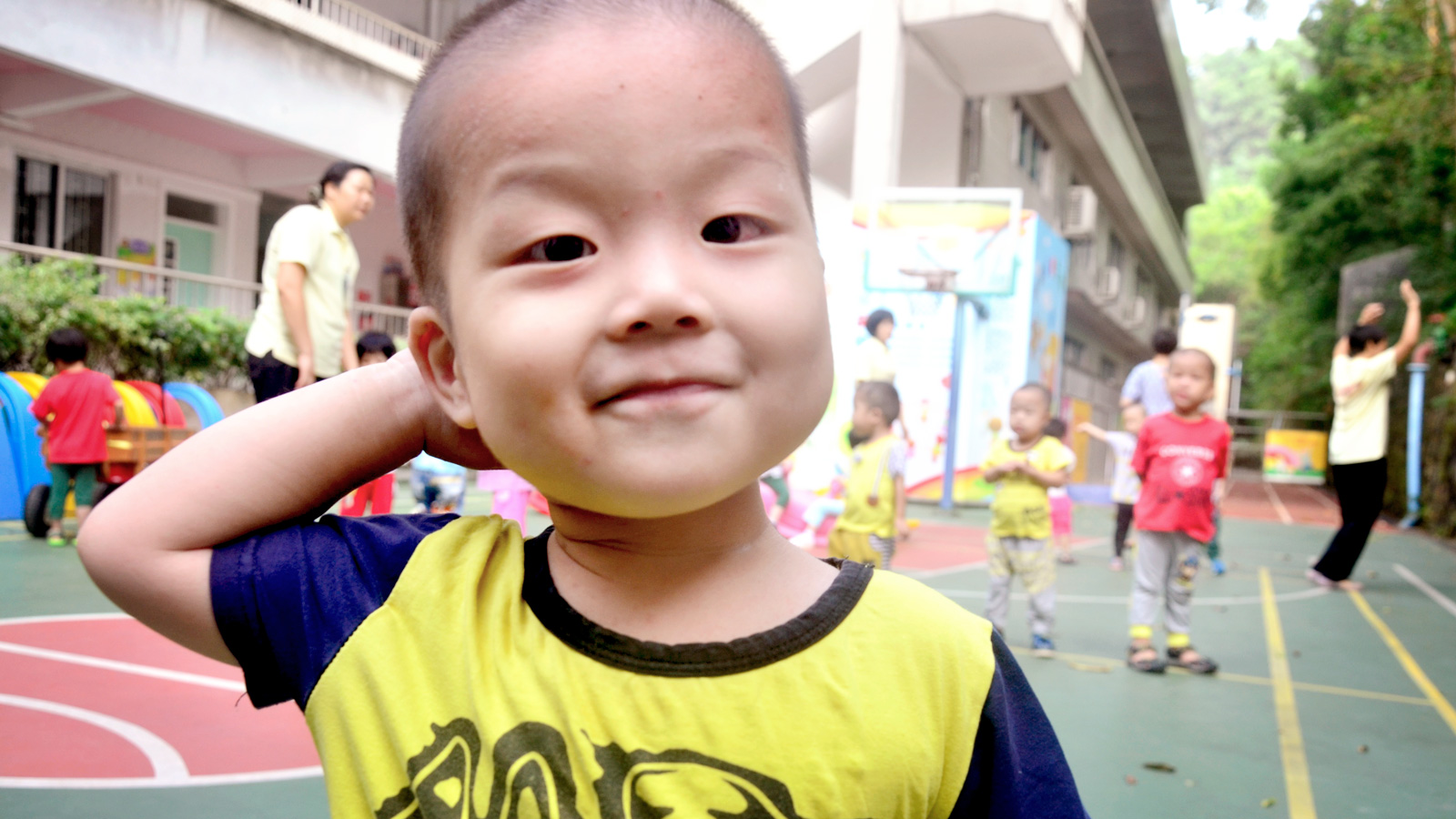 OneSky made an urgent appeal for funding so that the children could be reunited in a family—even if not the one they were born into.

Our pleas were heard and permission was granted to add a new family to our small community at the orphanage. After several rounds of interviews and introductory training, Mr. and Ms. Tang  became the new foster parents of Yuli and Yuping. Not only did they welcome the young siblings into their hearts, but they also agreed to accept two more children, Boliang and Jinlei. To ease the transition for all involved, the siblings were introduced to their new family earlier than Boliang and Jinlei. 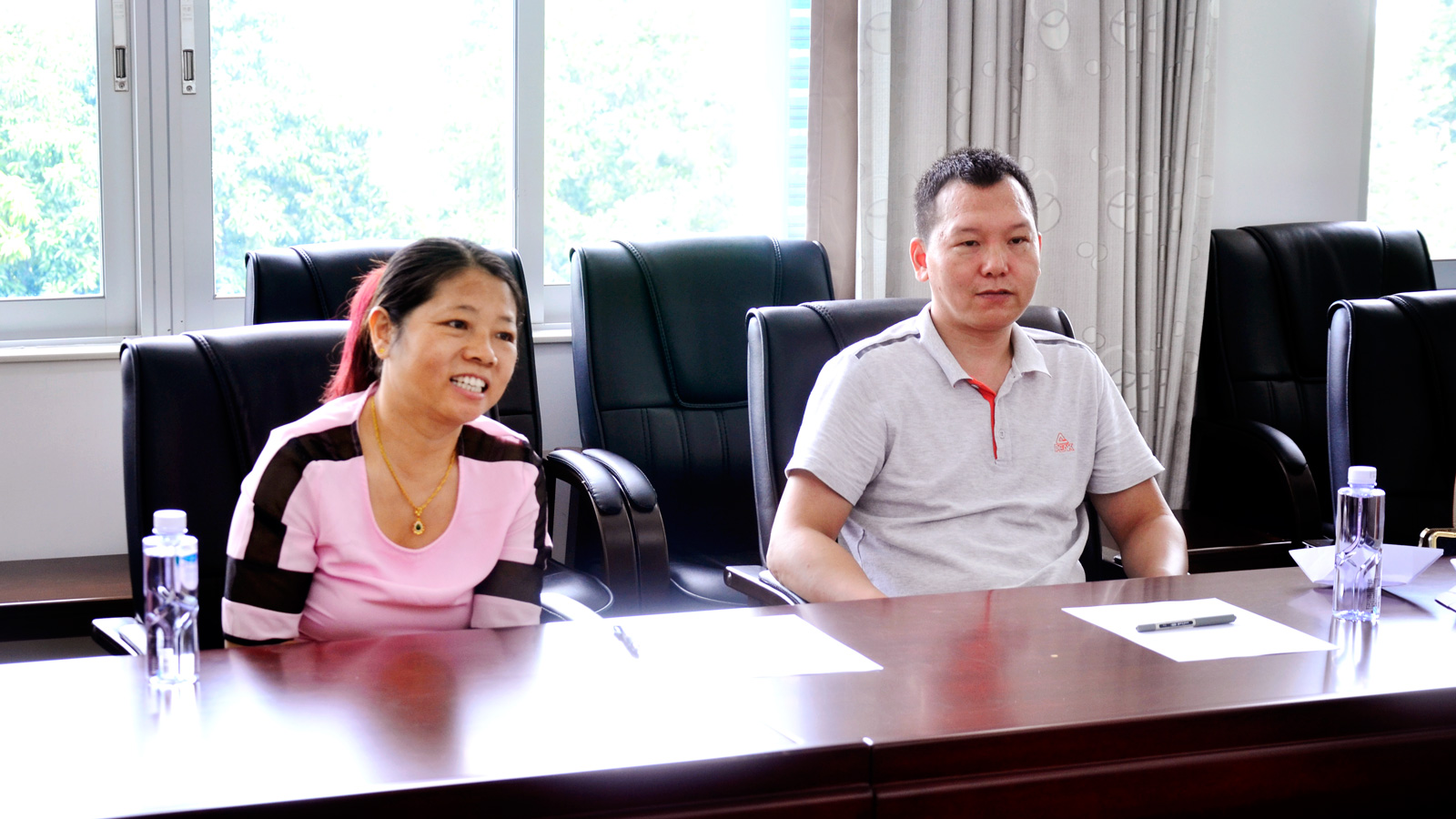 The new Tang family settled into an on-site furnished apartment provided by OneSky and the orphanage. After school, their foster mother is always there, with a smile, waiting to pick them up. 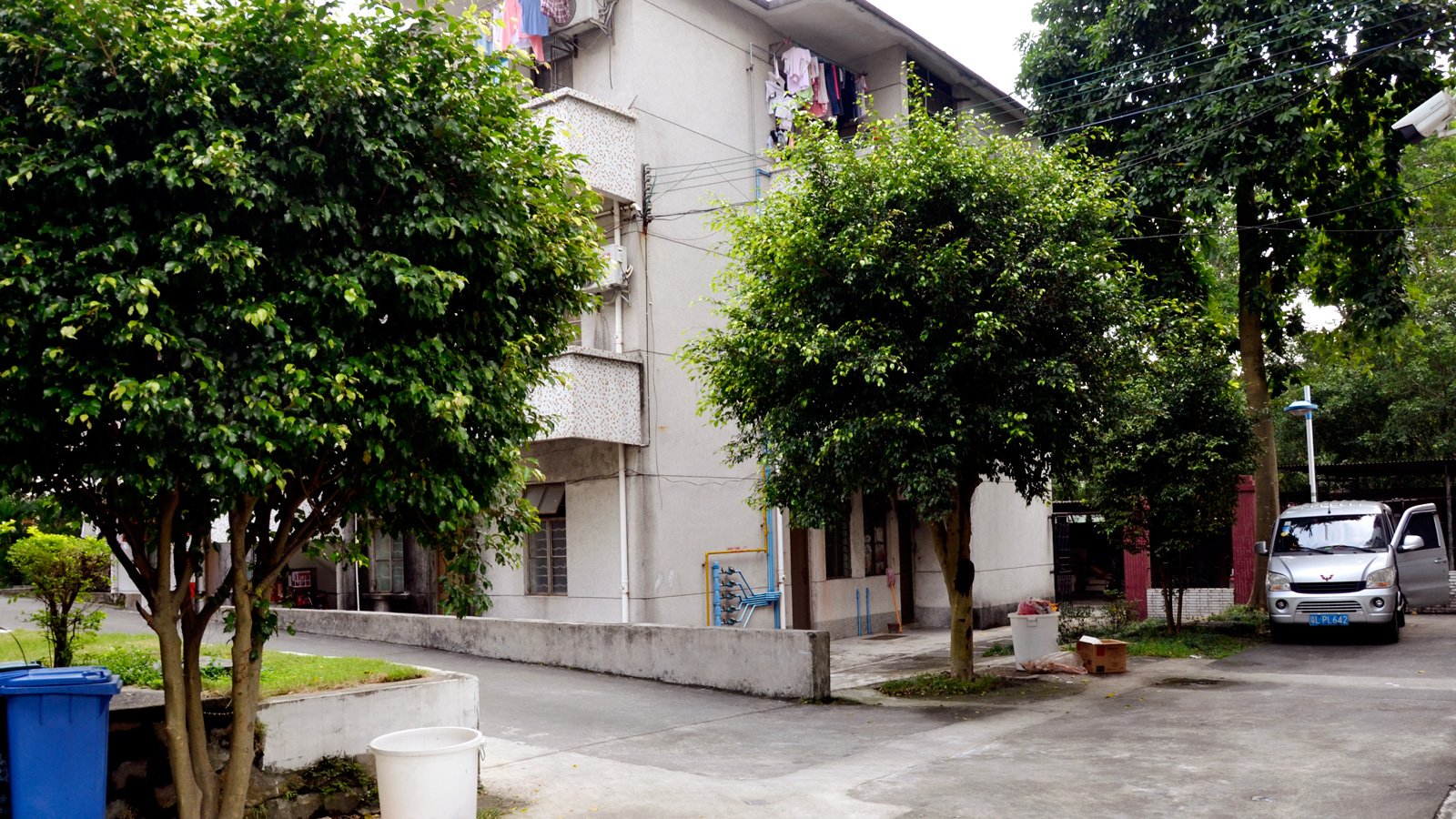 When Yuli and Yuping first came to their new home, they seemed ill at ease. 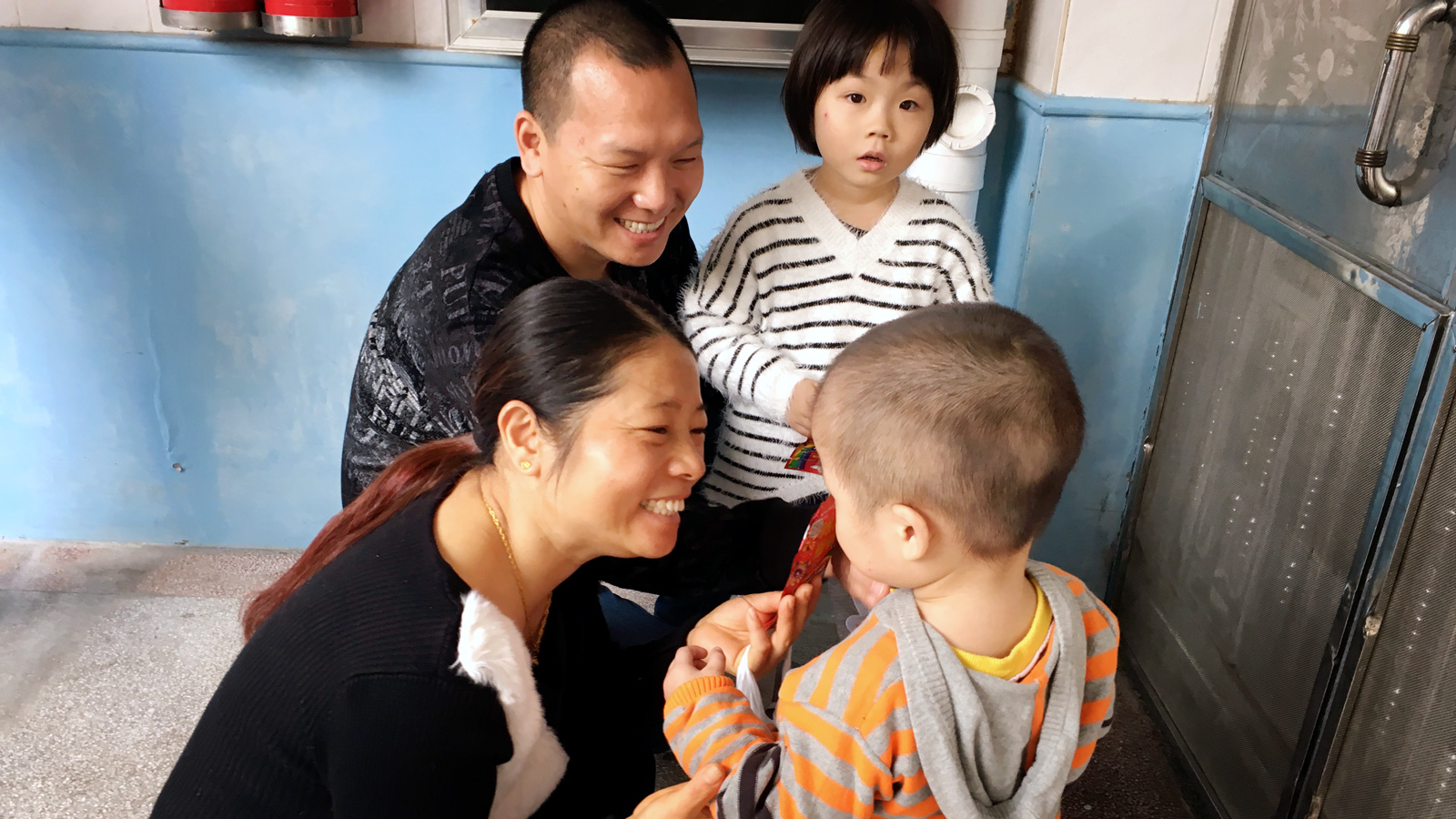 But after they had some lunch, drew pictures, watched TV, played games, and went out shopping for new clothes together, the children began to relax. Before too long, the siblings were calling their foster parents “Mom and Dad.” 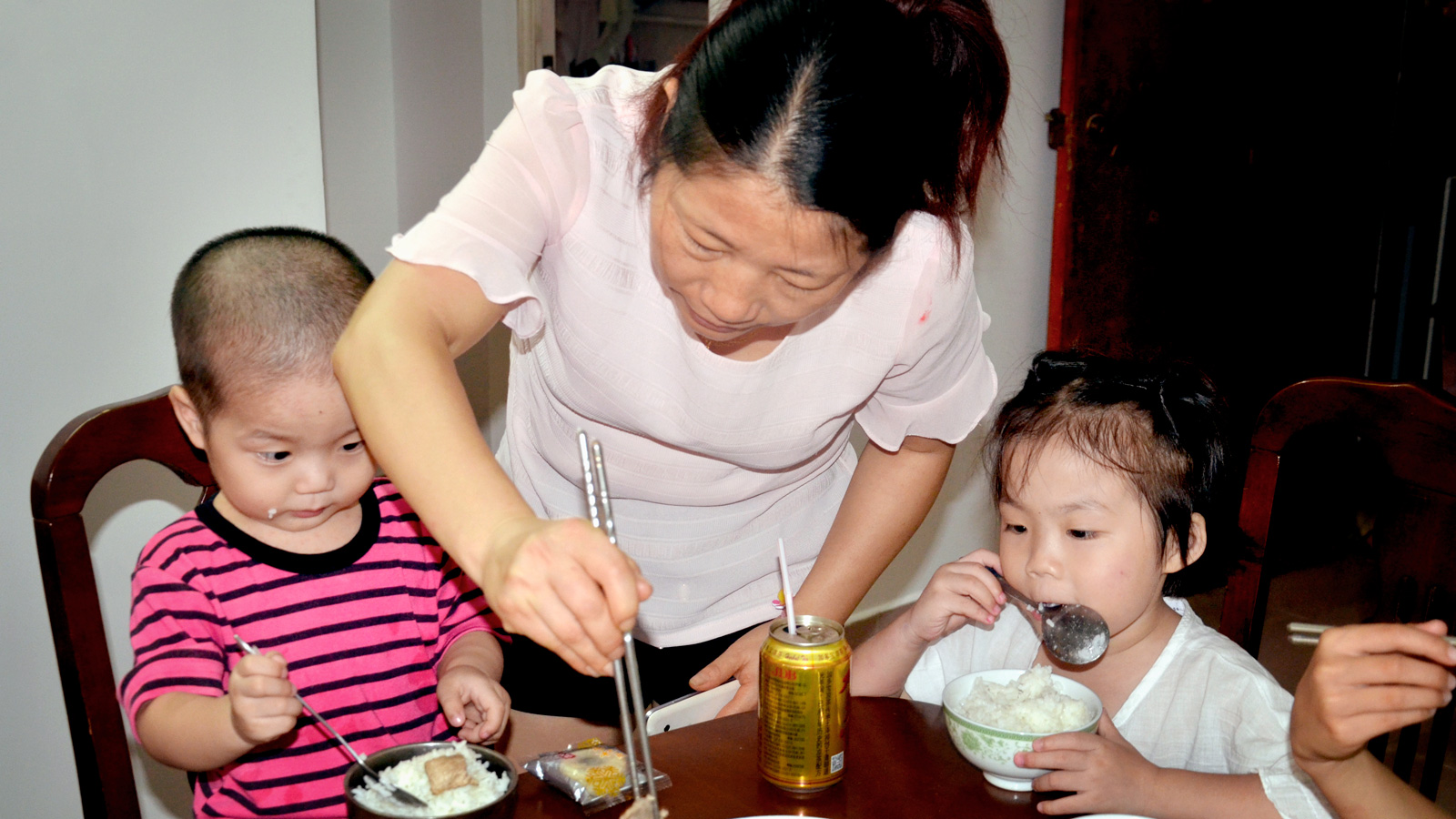 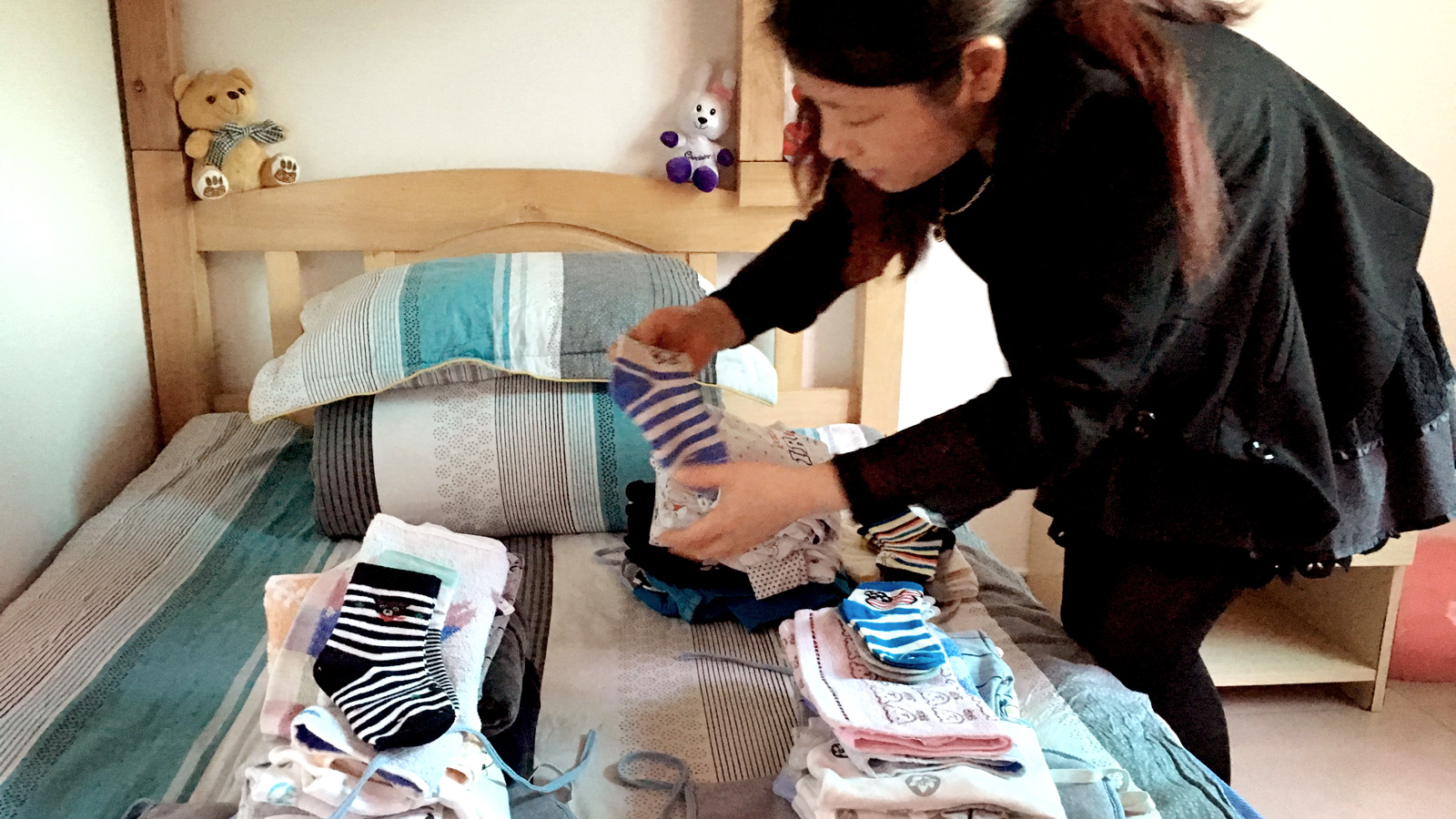 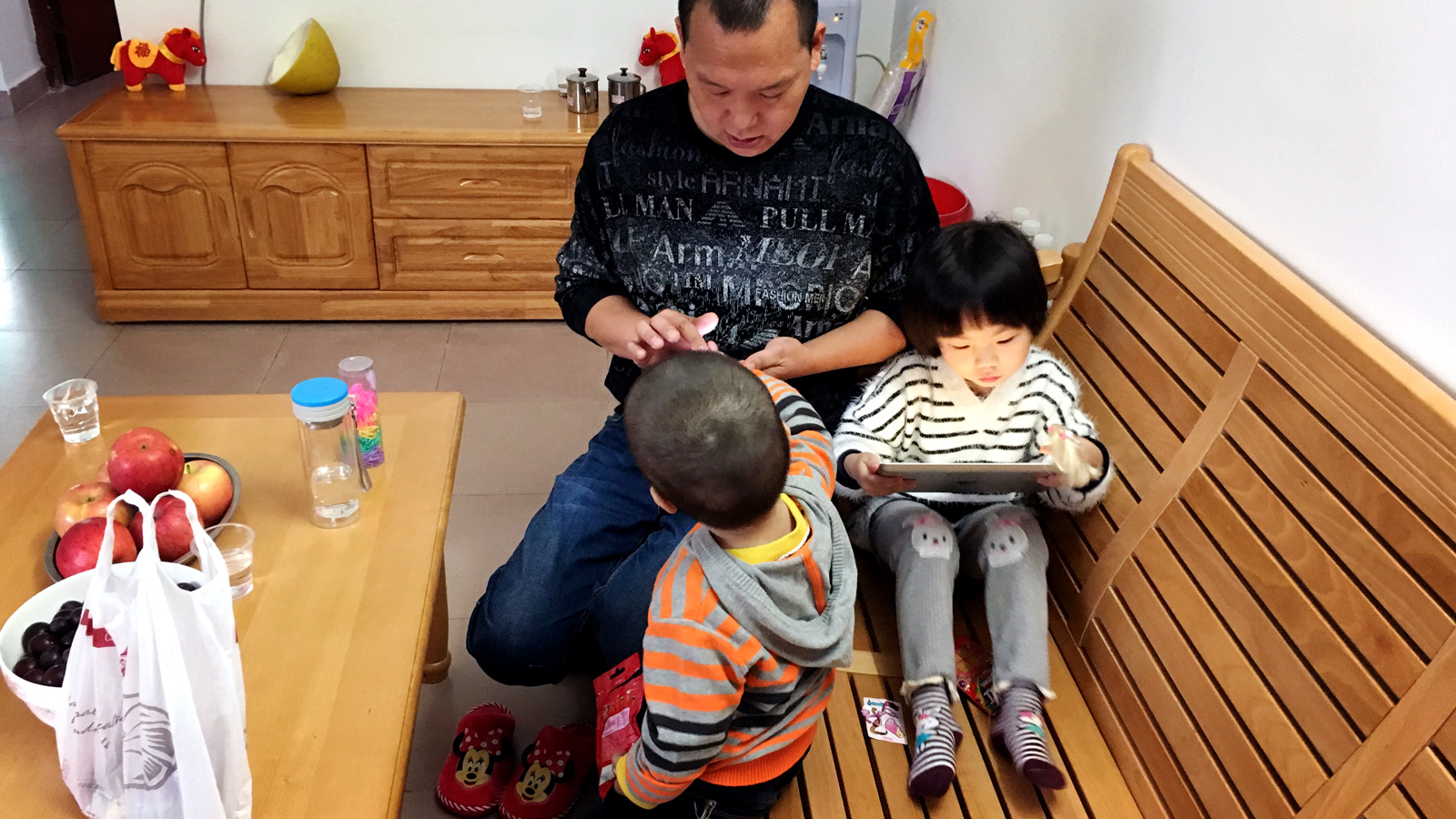 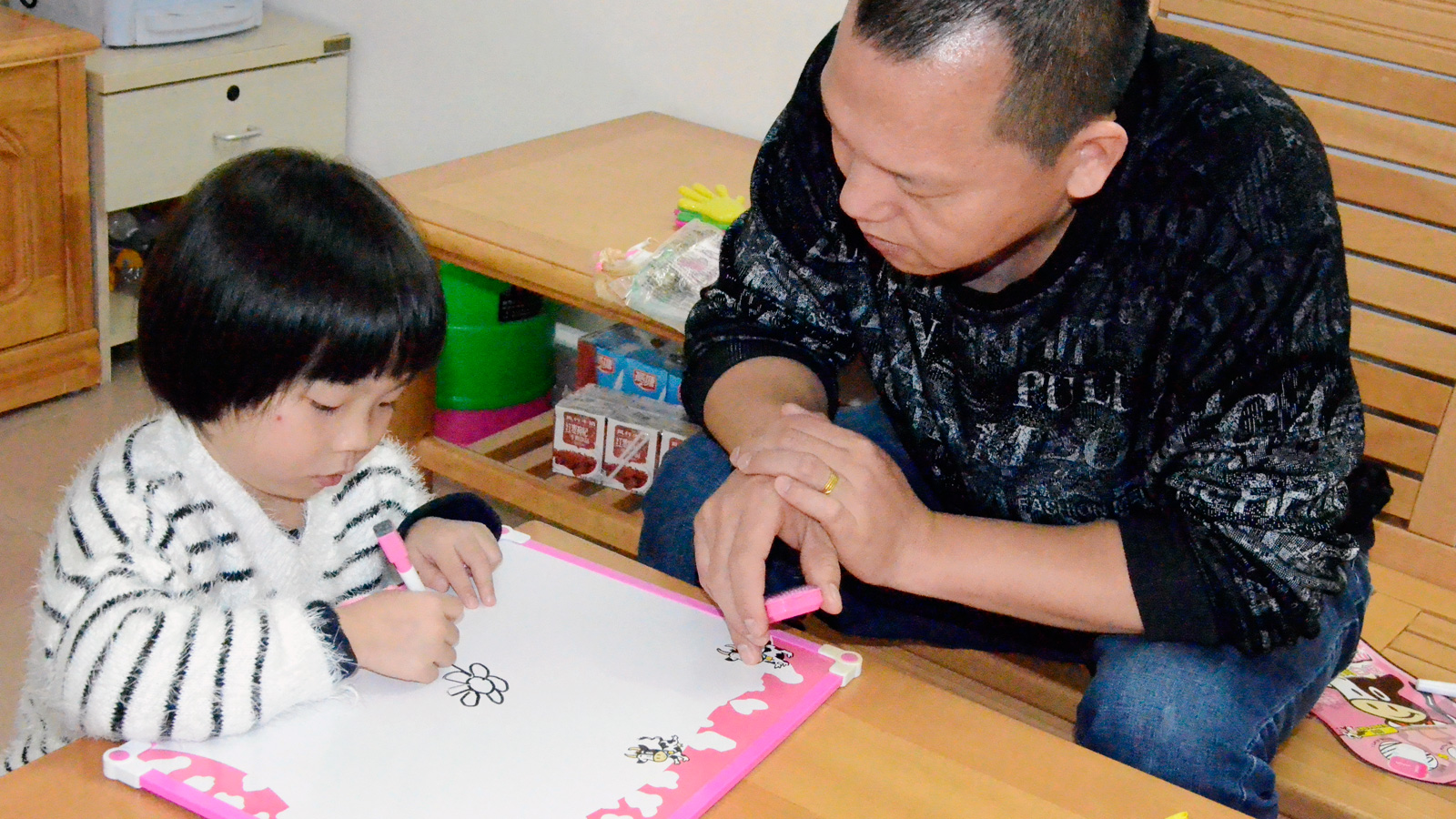 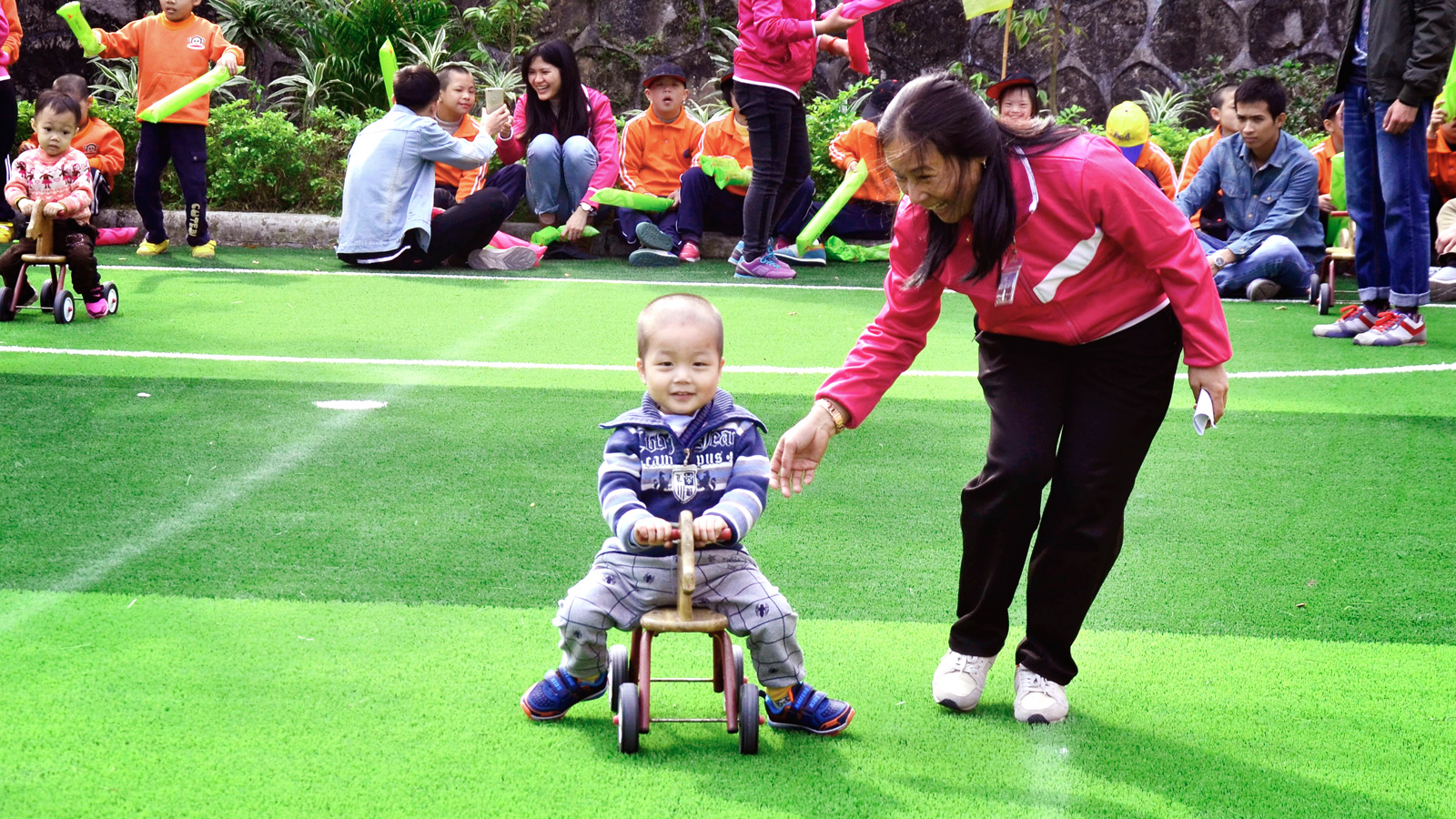 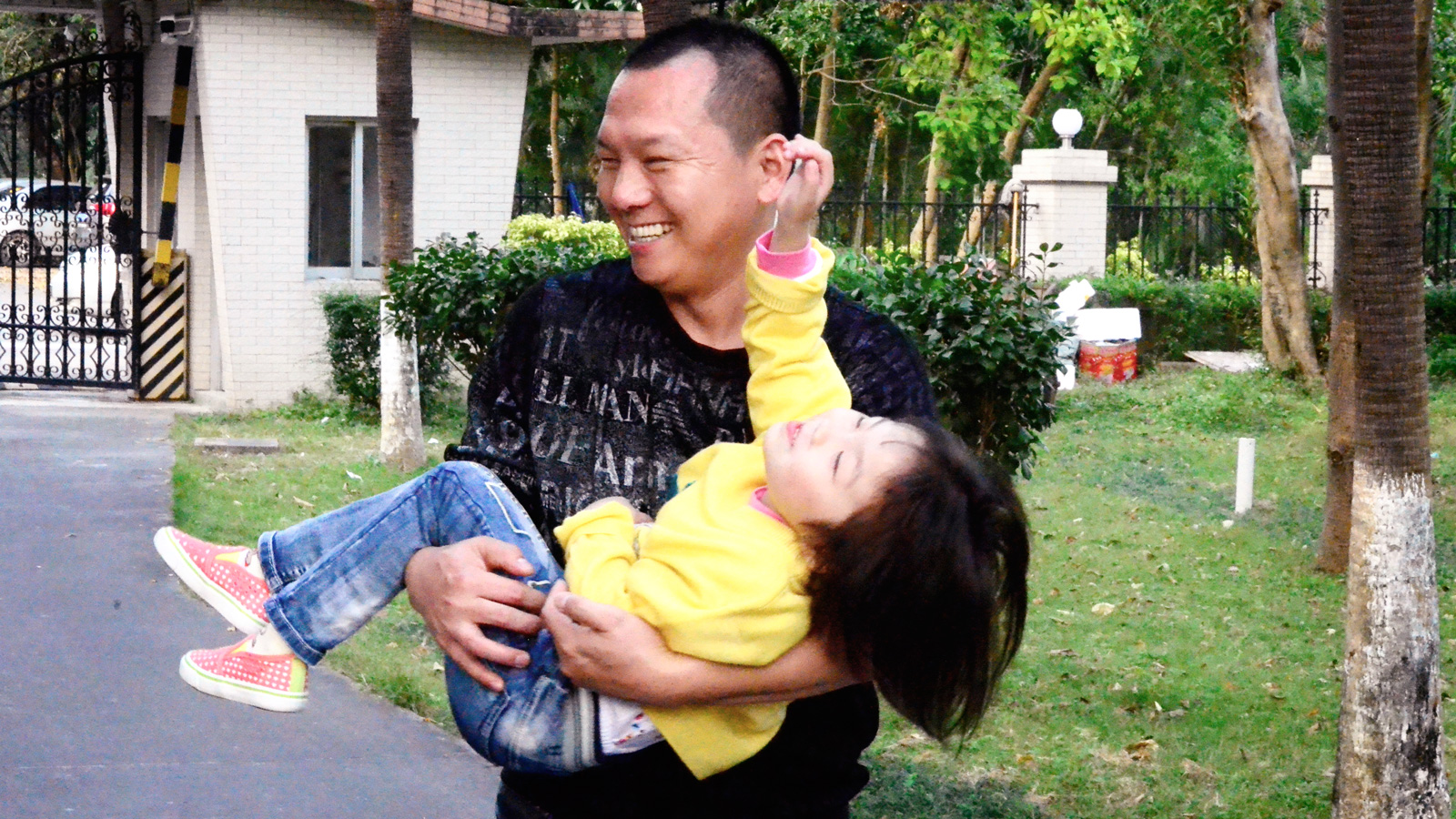 As the foster parents spent time, not only providing emotional support for their new children, but teaching them practical skills (such as learning how to do chores), something truly unexpected happened. Yuli began to take care of her little brother by pouring water for him, playing, and sharing snacks with him. 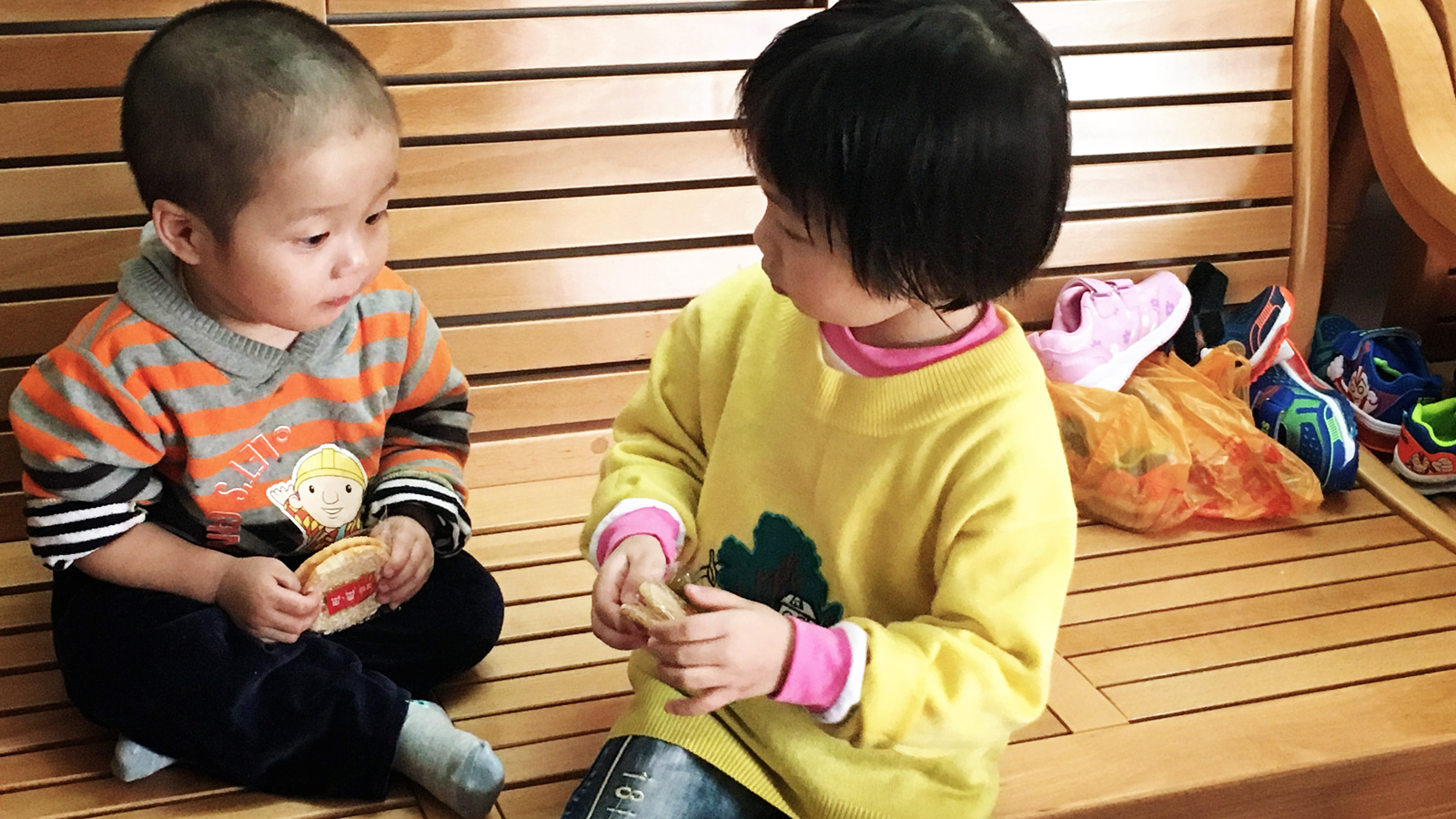 She was starting to act like a big sister again! 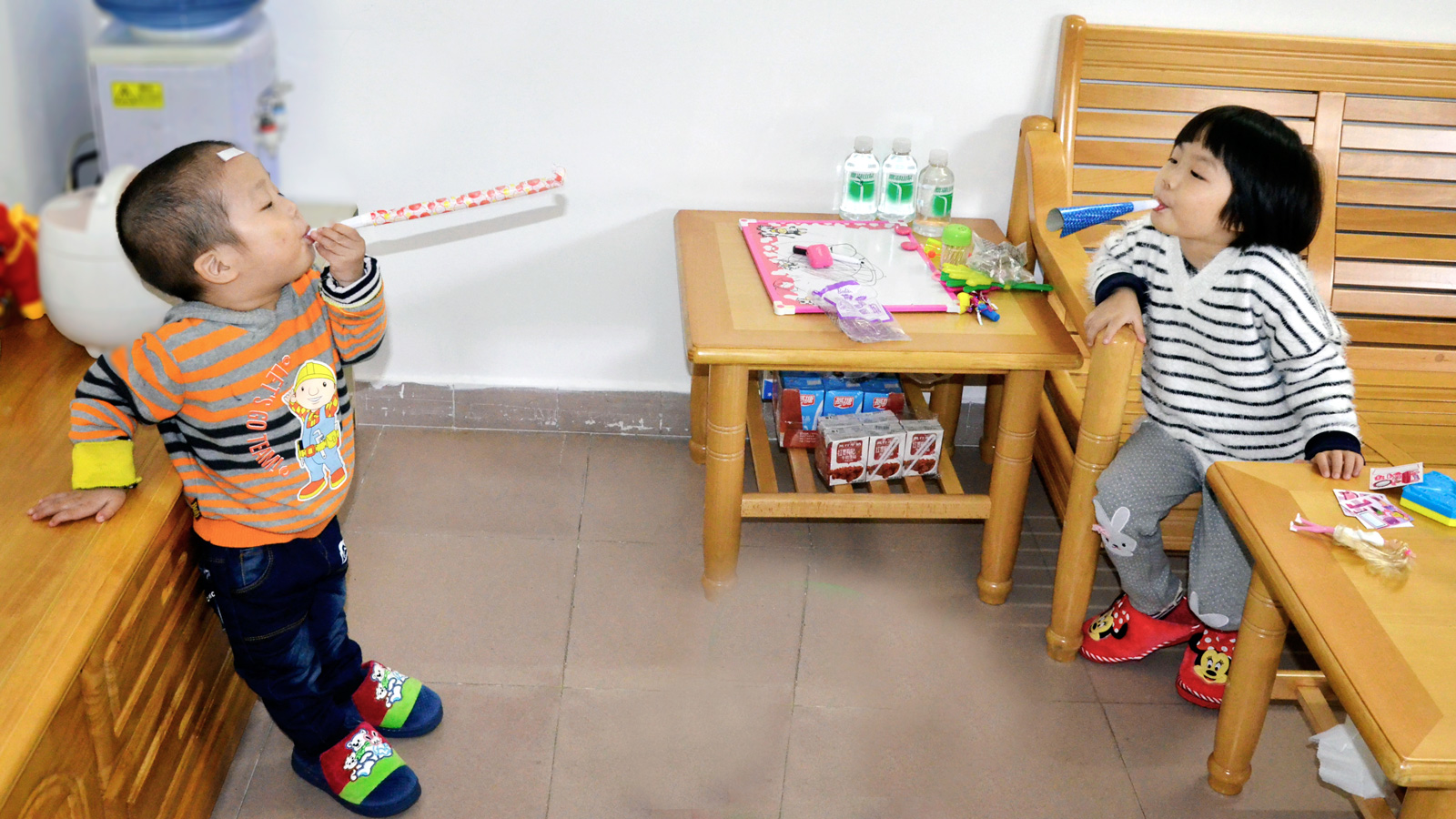 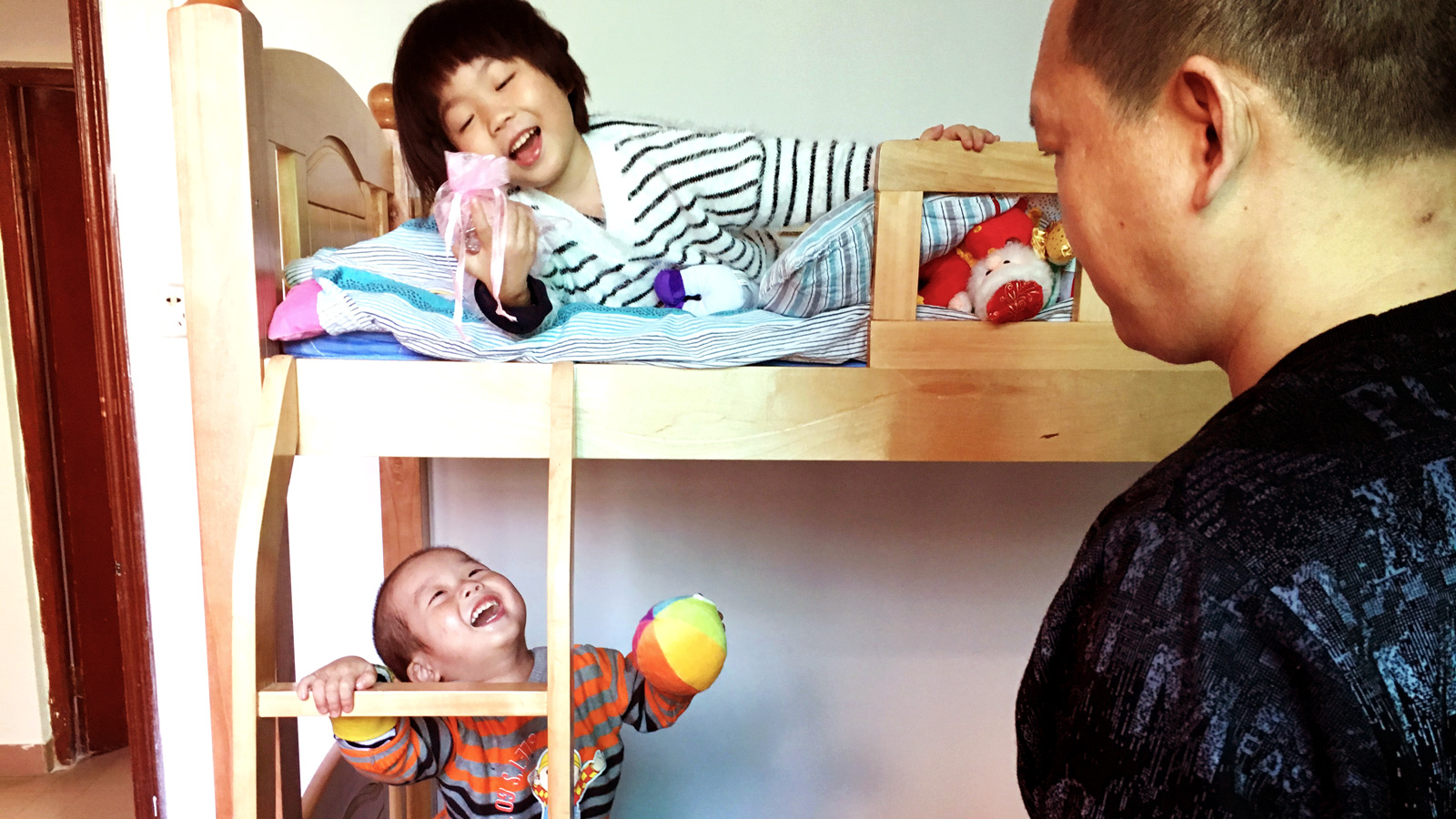 One evening, Yuli woke up during the night, asking to sleep with her brother. Watching the two siblings get all snuggled up in bed under the covers together, their new foster parents couldn’t help but be overjoyed. 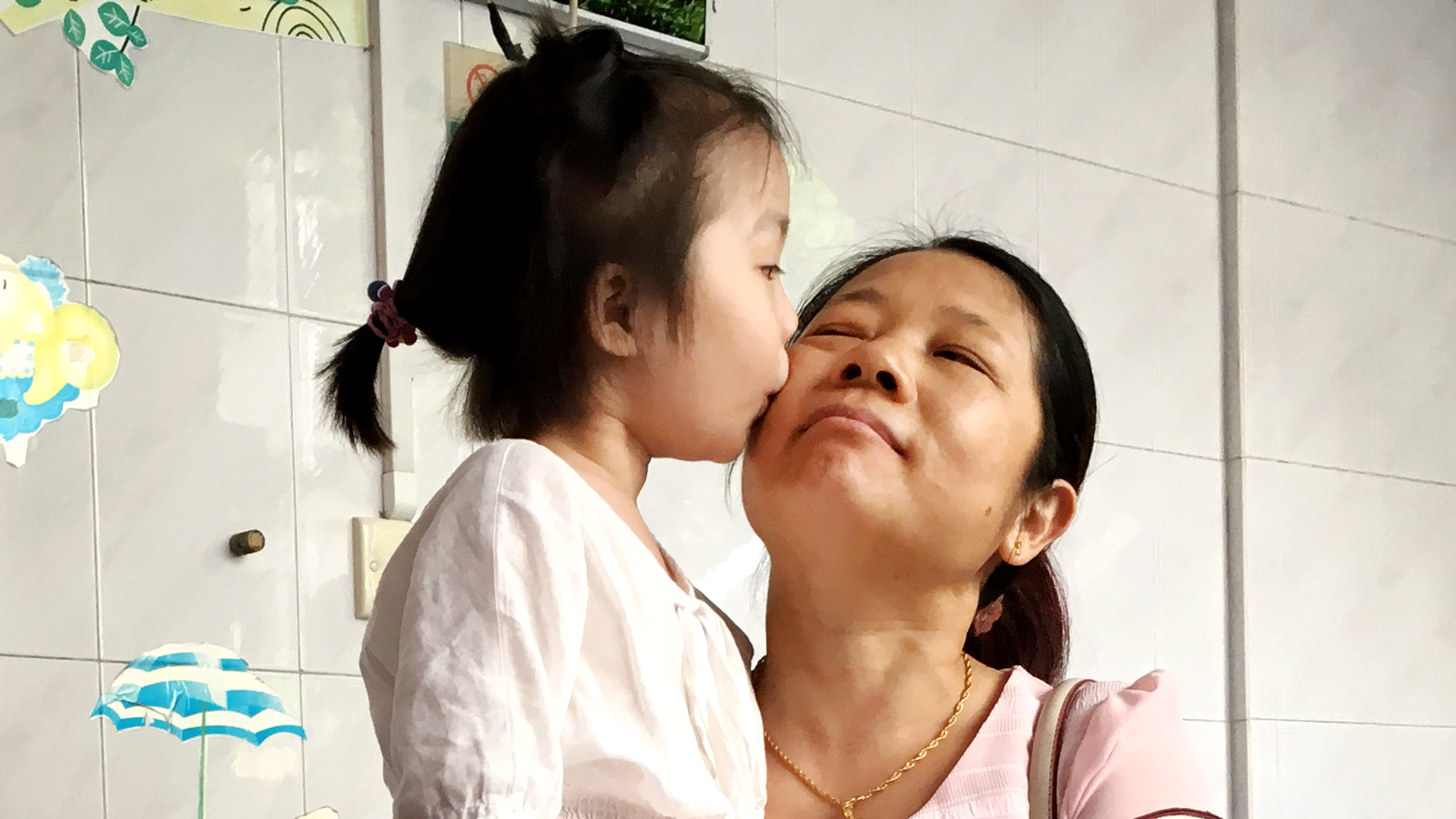 In preschool the next day Yuli happily bragged to her friends that she now had a family. She also said she couldn’t wait for her pals to come over to play at her new apartment. Now, the OneSky team decided, it was time to bring Boliang and Jinlei into the family.

Born in Africa, Boliang could not speak a word in Chinese when he was brought into the orphanage a couple years before. His parents, like those of the siblings, had been sent to prison. 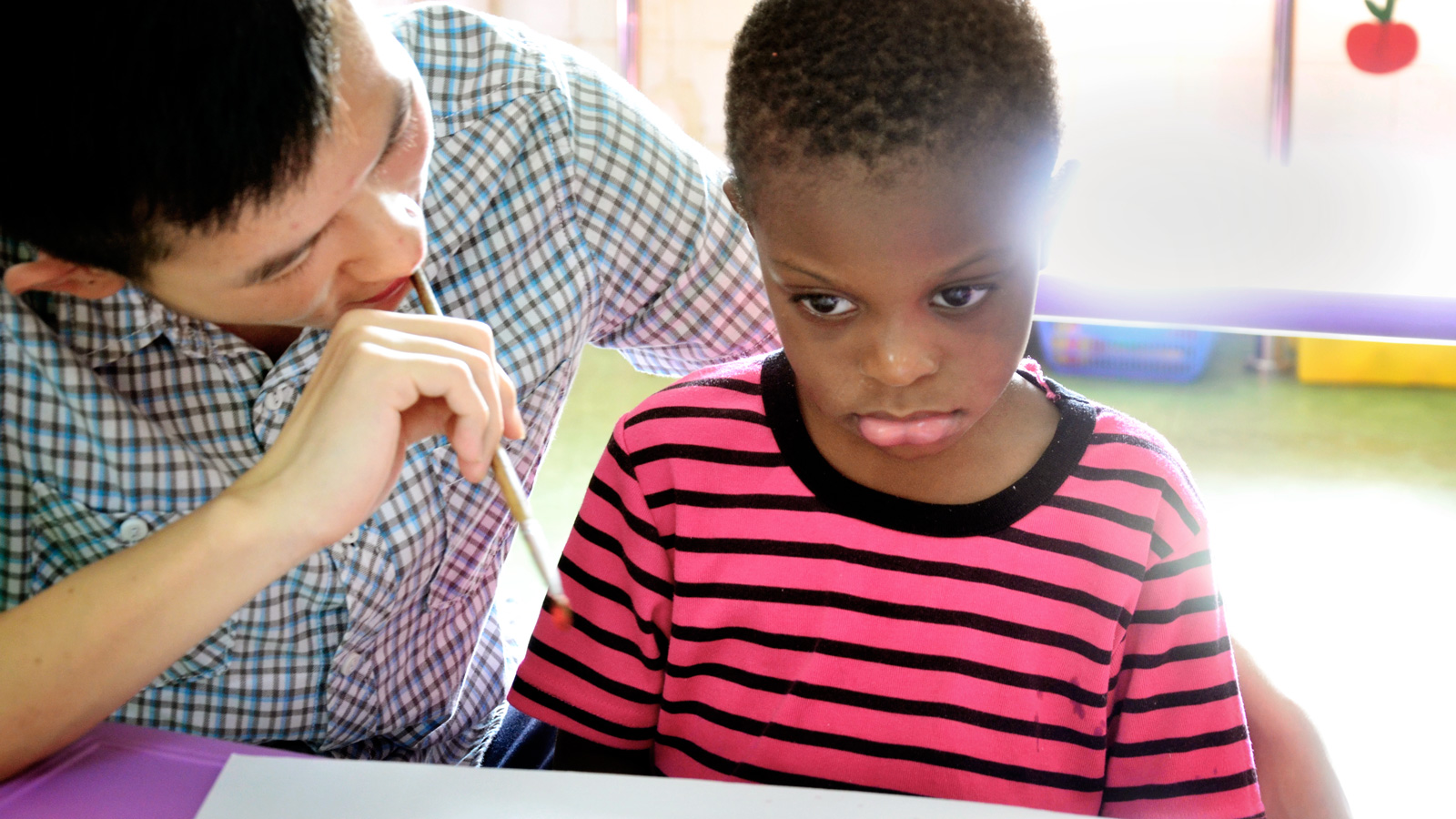 Little Jinlei, the fourth new addition, has Down Syndrome and was abandoned by parents unable to care for him. 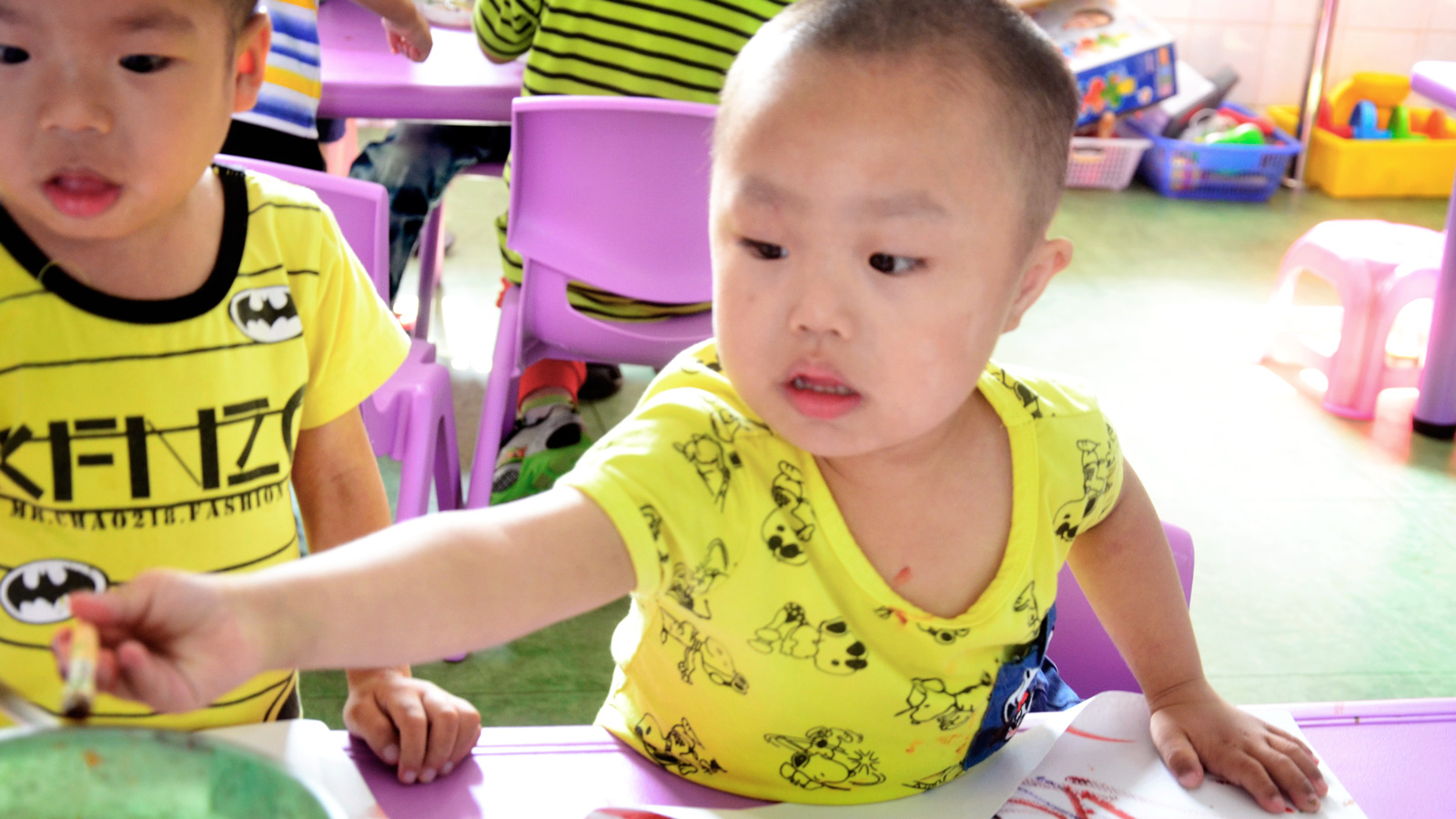 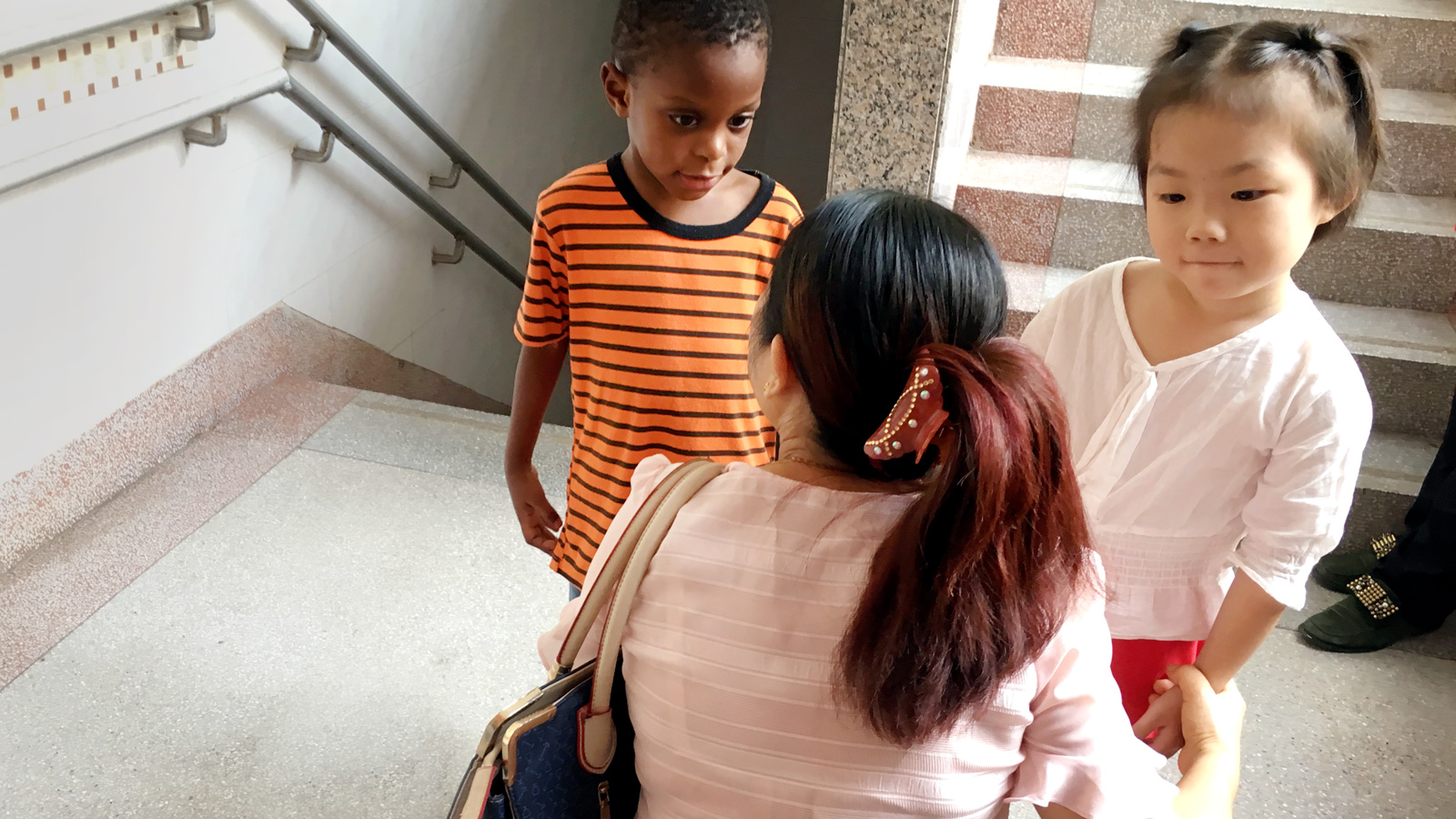 After school on that first day, on the walk back to their apartment, Yuli protectively took hold of one of little Luping’s hands. They walked like that, all the way back. An older sister and younger brother, holding hands—just as they had when they first arrived at the orphanage. 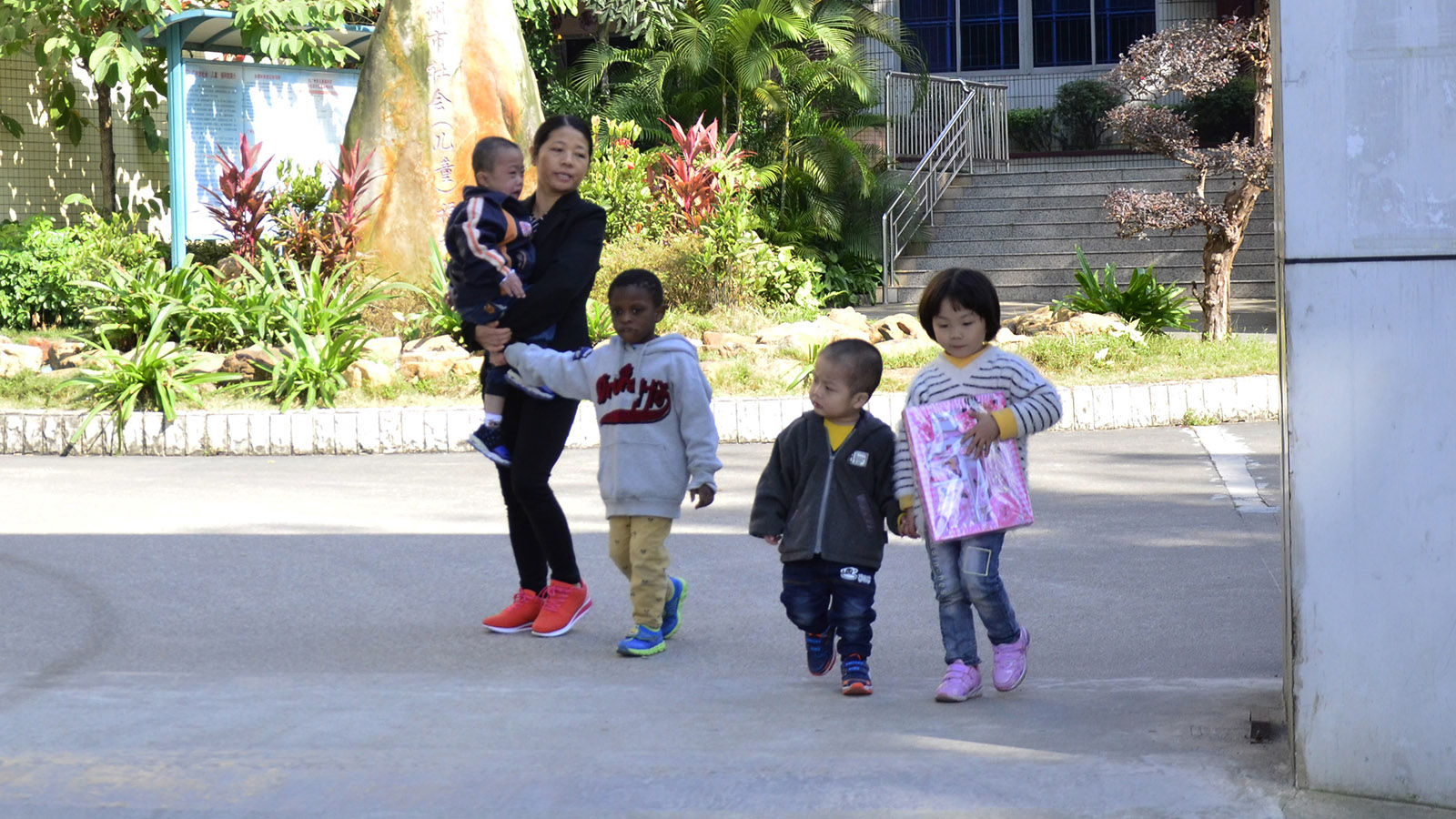 But it didn’t take long for all four children to accept each other as part of the family, just as if it had always been that way. 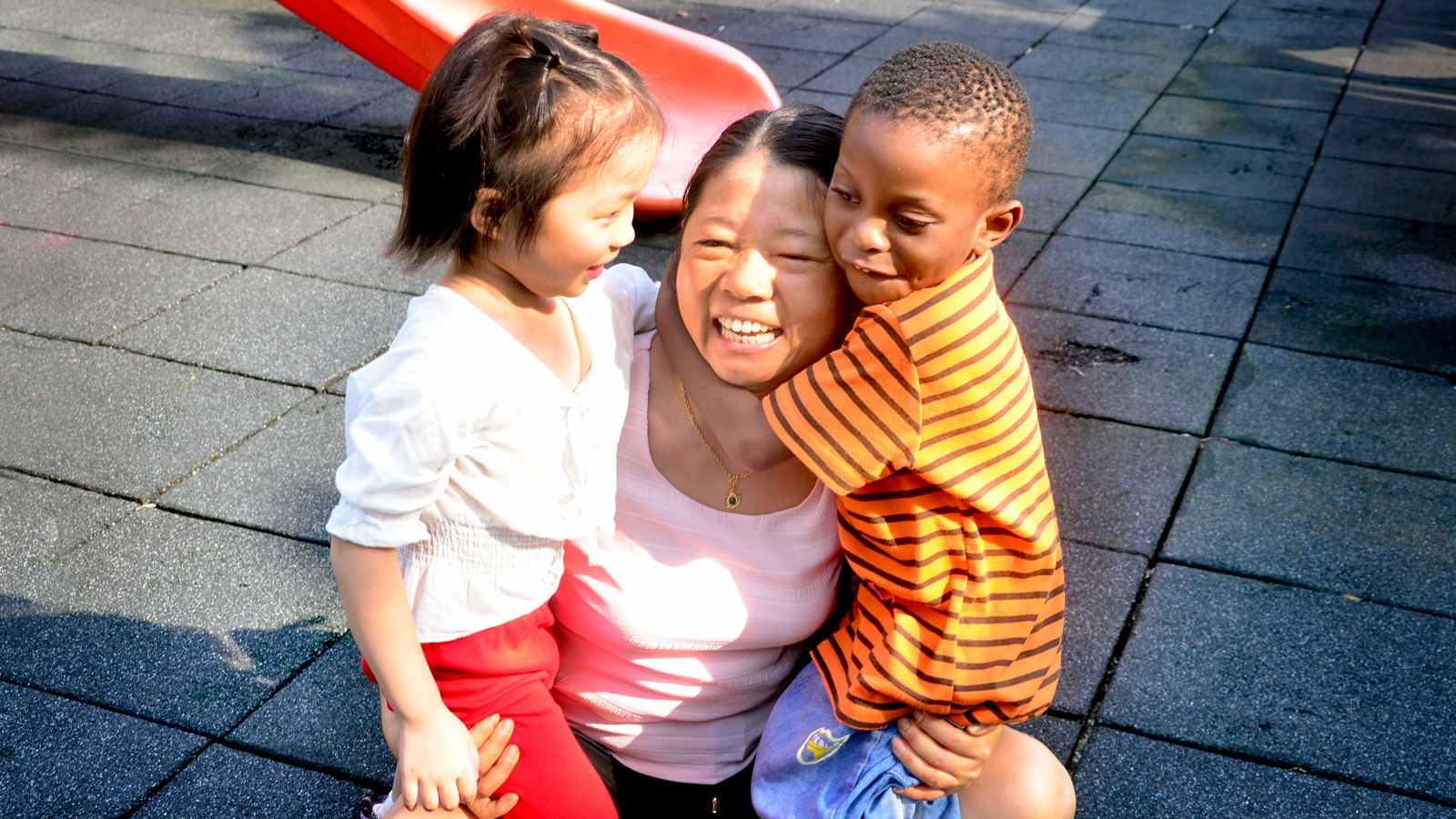 Little children are remarkably resilient when they know that somebody cares. 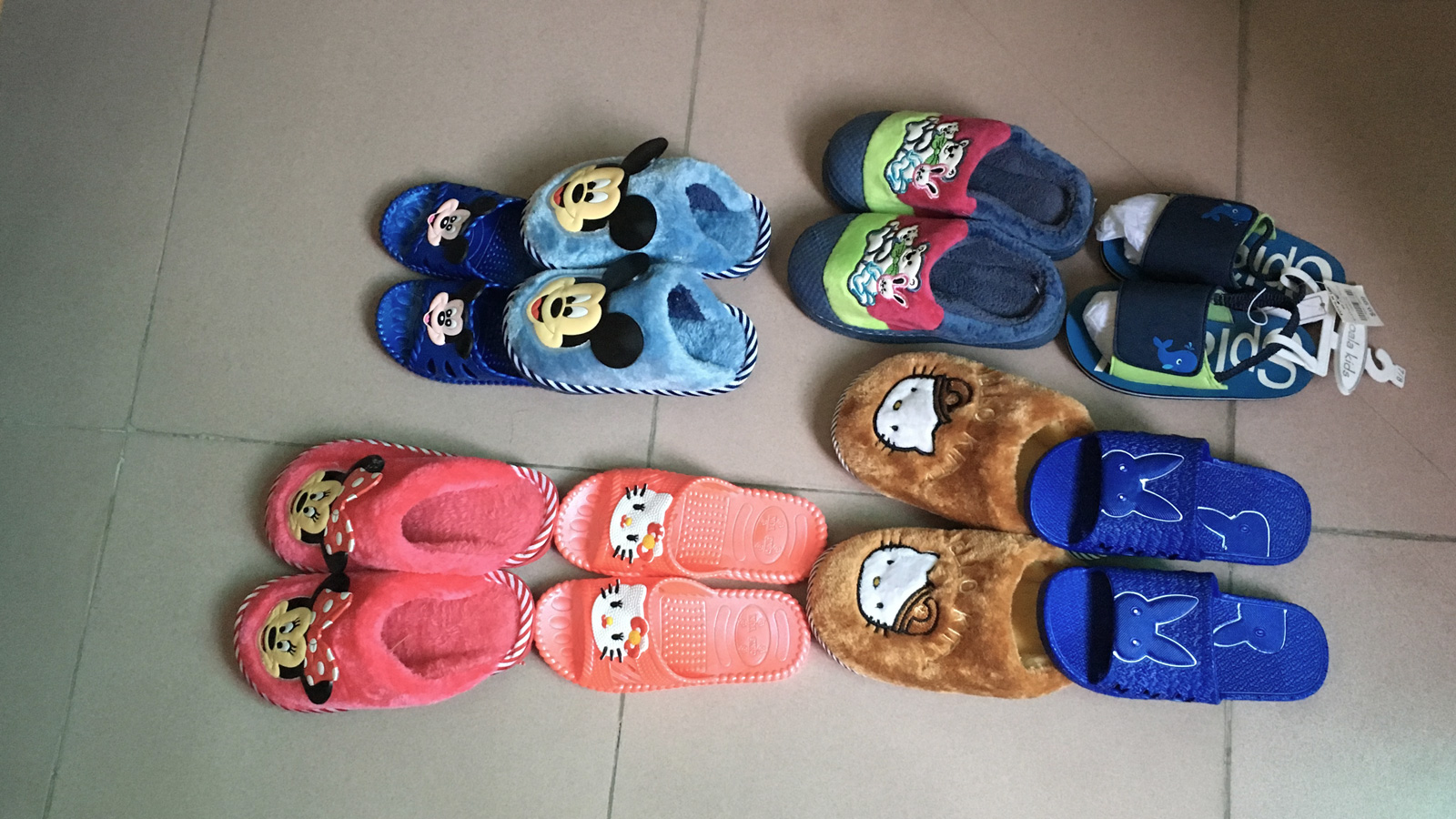 A Village Teacher — “Everybody’s welcome in this classroo...
Scroll to top