The day after Anjing’s reunion with her first nanny, she entered the institution’s preschool accompanied by her Chunhui China Care Home (CCCH) preschool teacher Zhao Xiaoju.

As she had done the day before, Zhao helped Anjing re-adjust to her life at the institution after her long stay at CCCH. First she introduced her to her new teacher, Li Yihua. “Anjing, this is Teacher Li.” With Zhao by her side, Anjing turned to Li, smiled and said, “Teacher Li!” 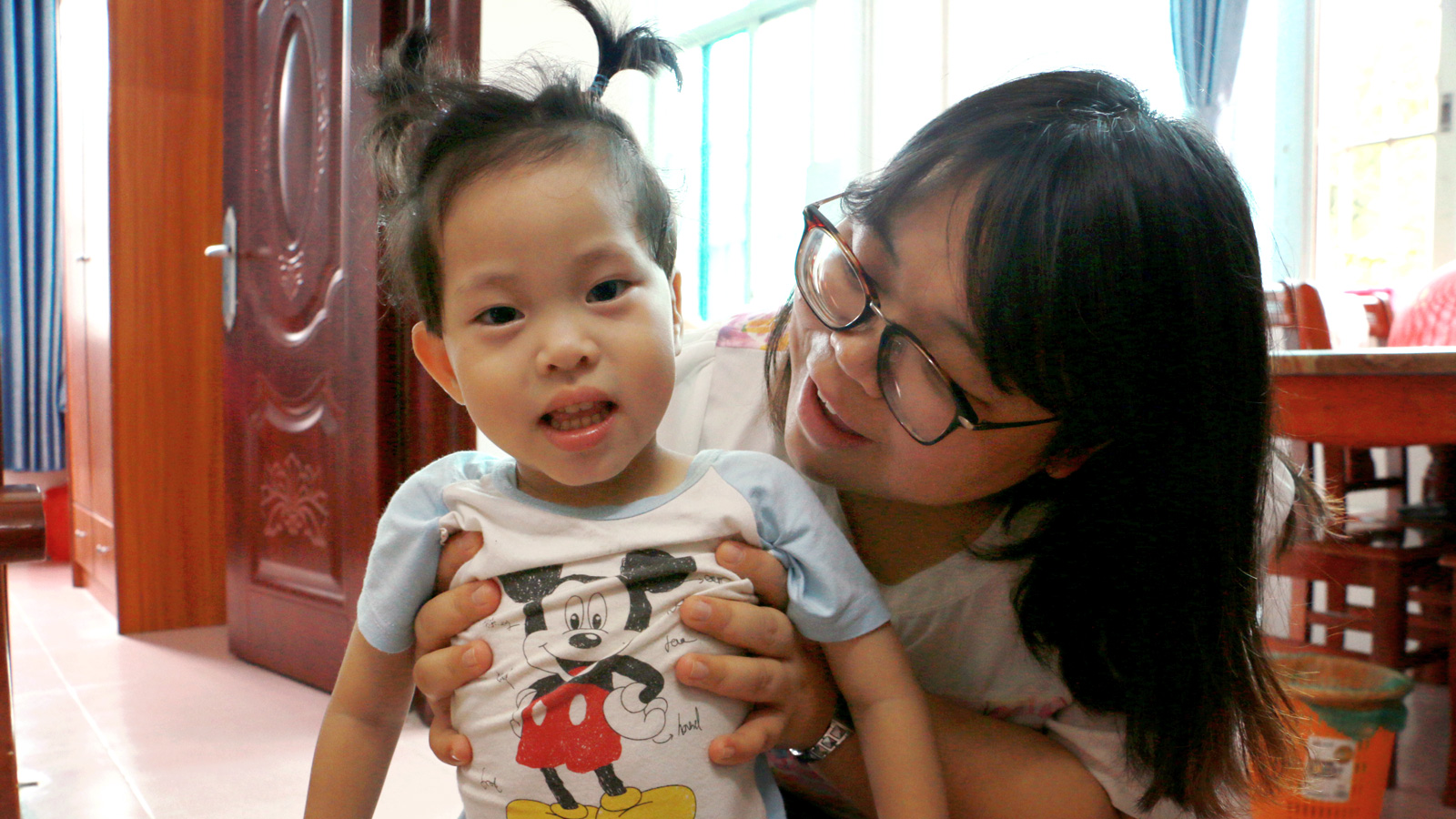 Still, Anjing’s acceptance of her new teacher was tentative. She would play with Li for a while, but it was clear that she also wanted to keep Zhao in her sight. She would look up, scanning the room until she found Zhao.

Li also did her best to help Anjing’s transition to her new classroom. She gently lifted her into a wheelchair where Anjing watched the children dancing to music. Anjing can’t walk, yet let alone dance, but nevertheless together, Li and Anjing found a way to make the music class enjoyable for Anjing. Li handed Anjing a bottle with some beans inside. With no further instruction, Anjing immediately started smiling and shaking the bottle rhythmically. 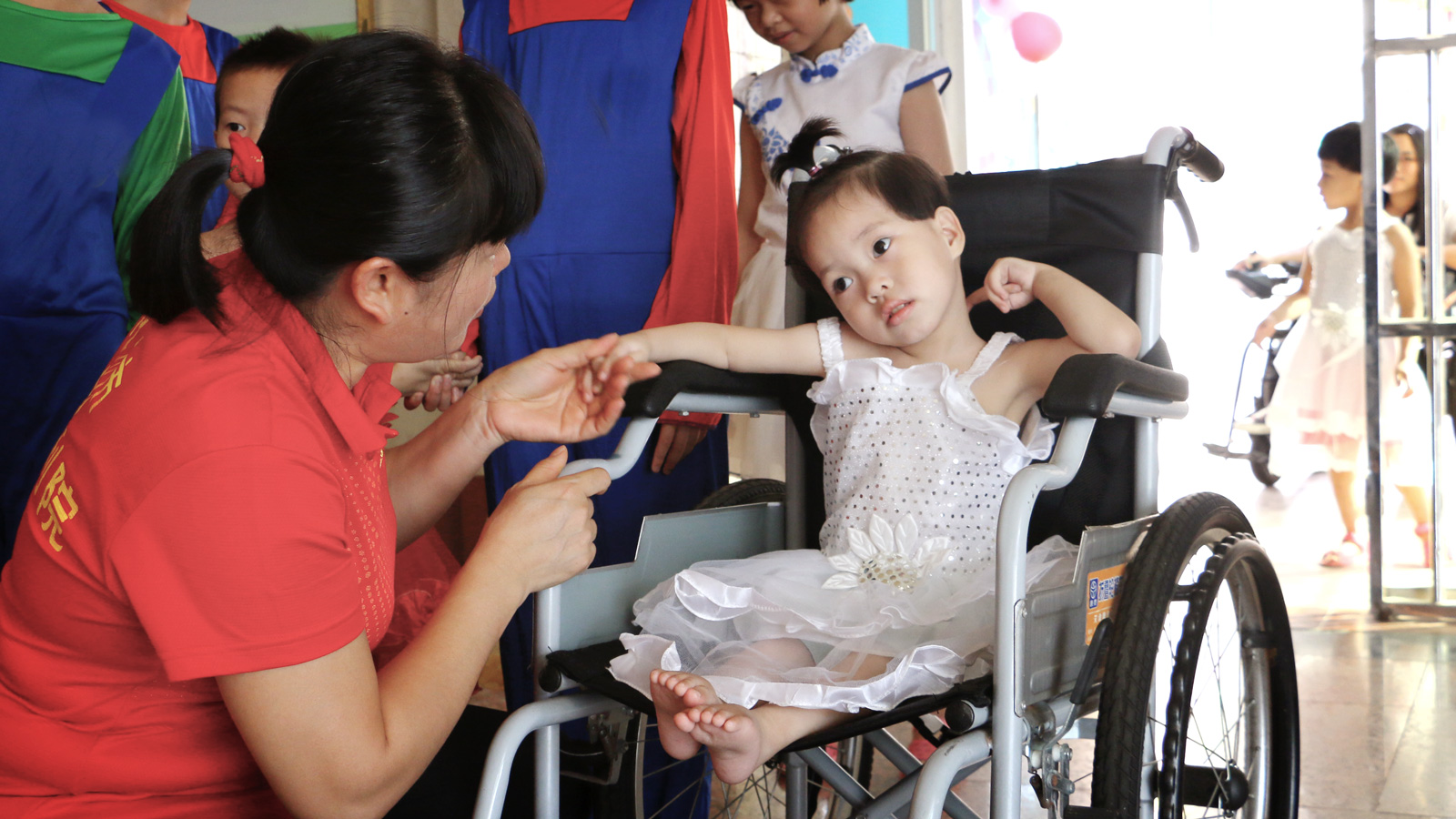 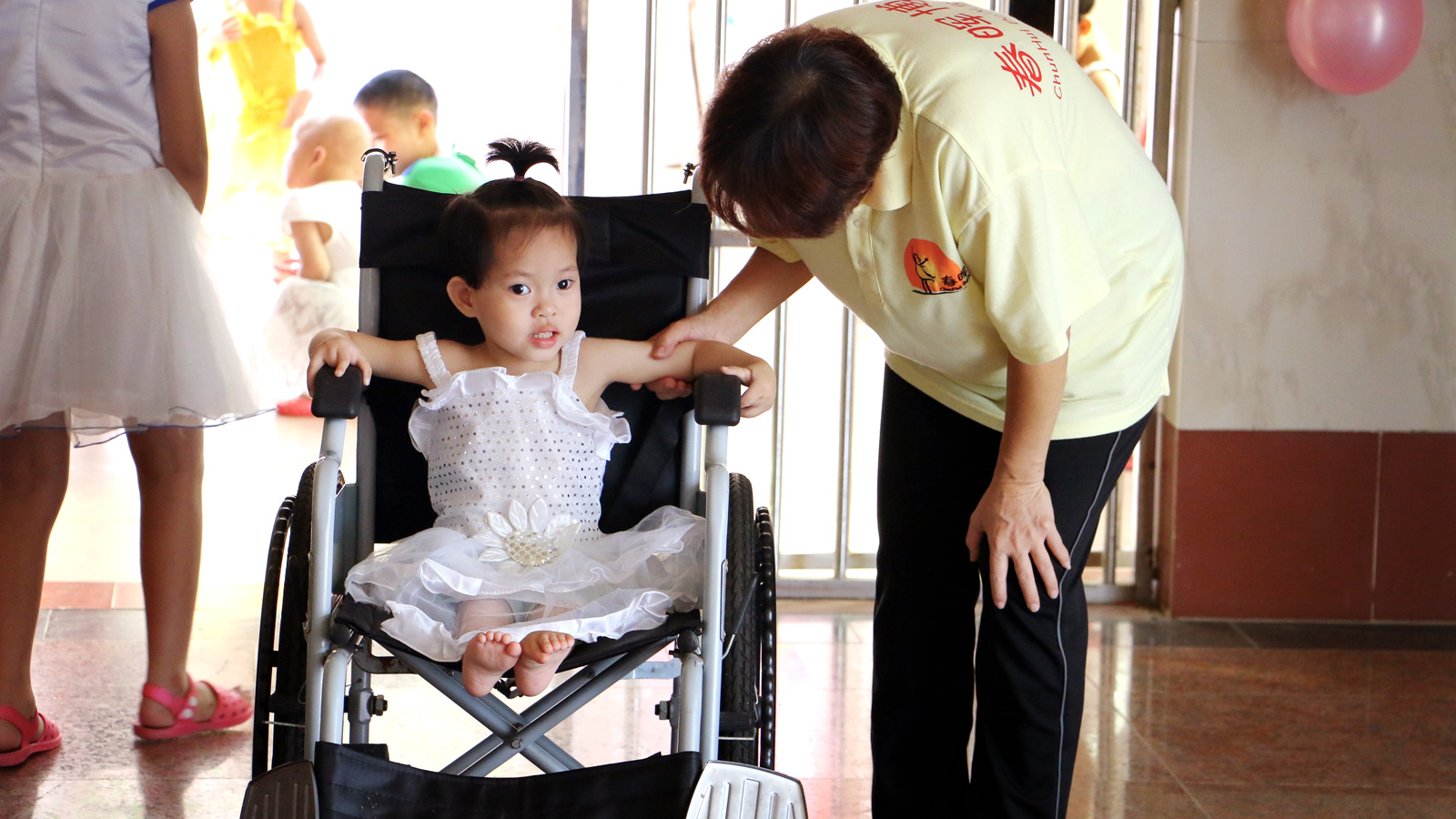 Zhao also gave Li lots of ideas about how to take care of her new girl. For example, when playing on the mat with Anjing, Zhao suggested massaging her feet and distracting her from the pain by giving her a toy to play with at the same time. The CCCH medical coordinator, who had accompanied the children to the institution, demonstrated how to massage Anjing’s feet. Zhao also suggested taking Anjing to a railing so she could hold onto it and stand, at least for a few minutes. 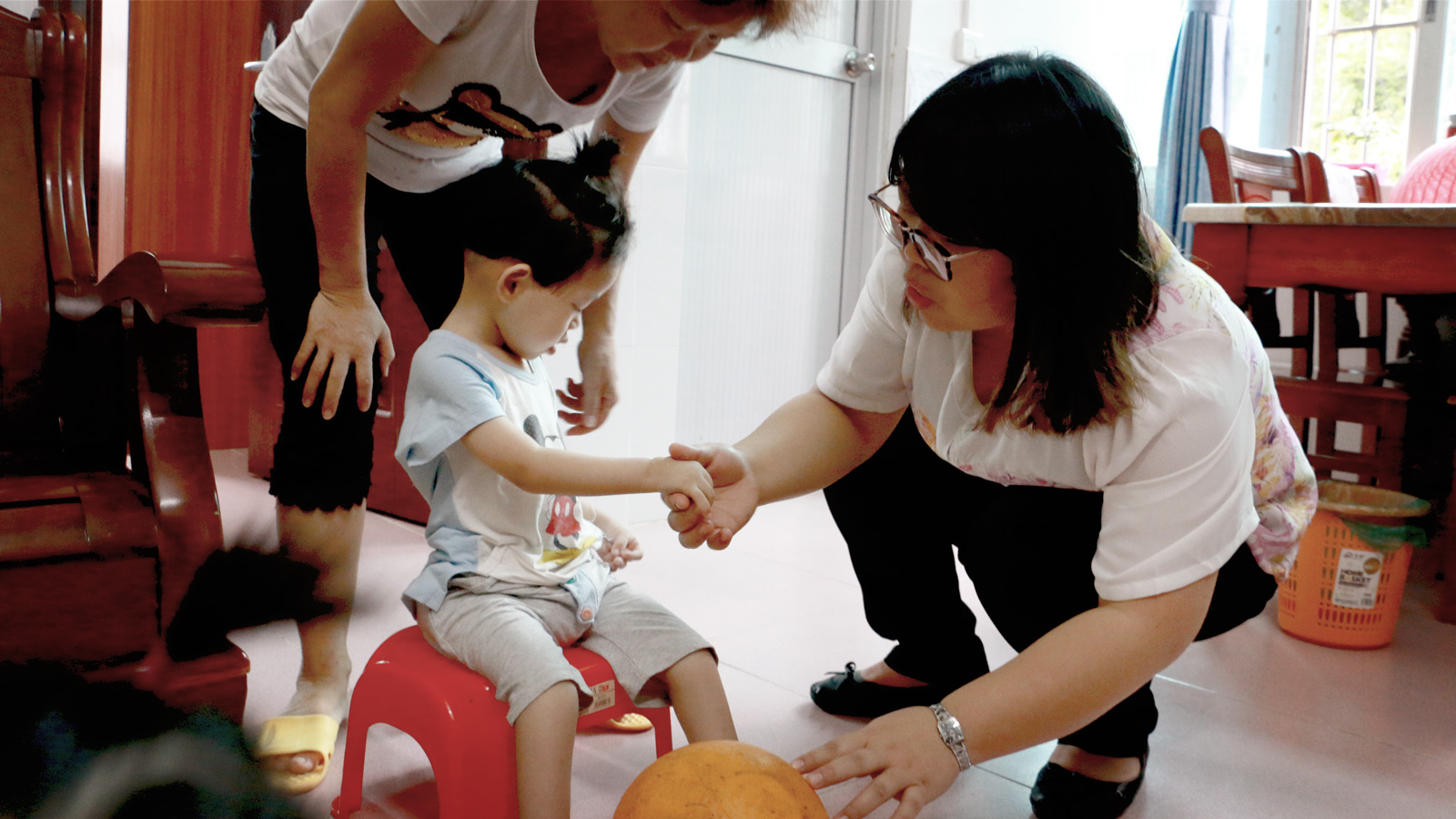 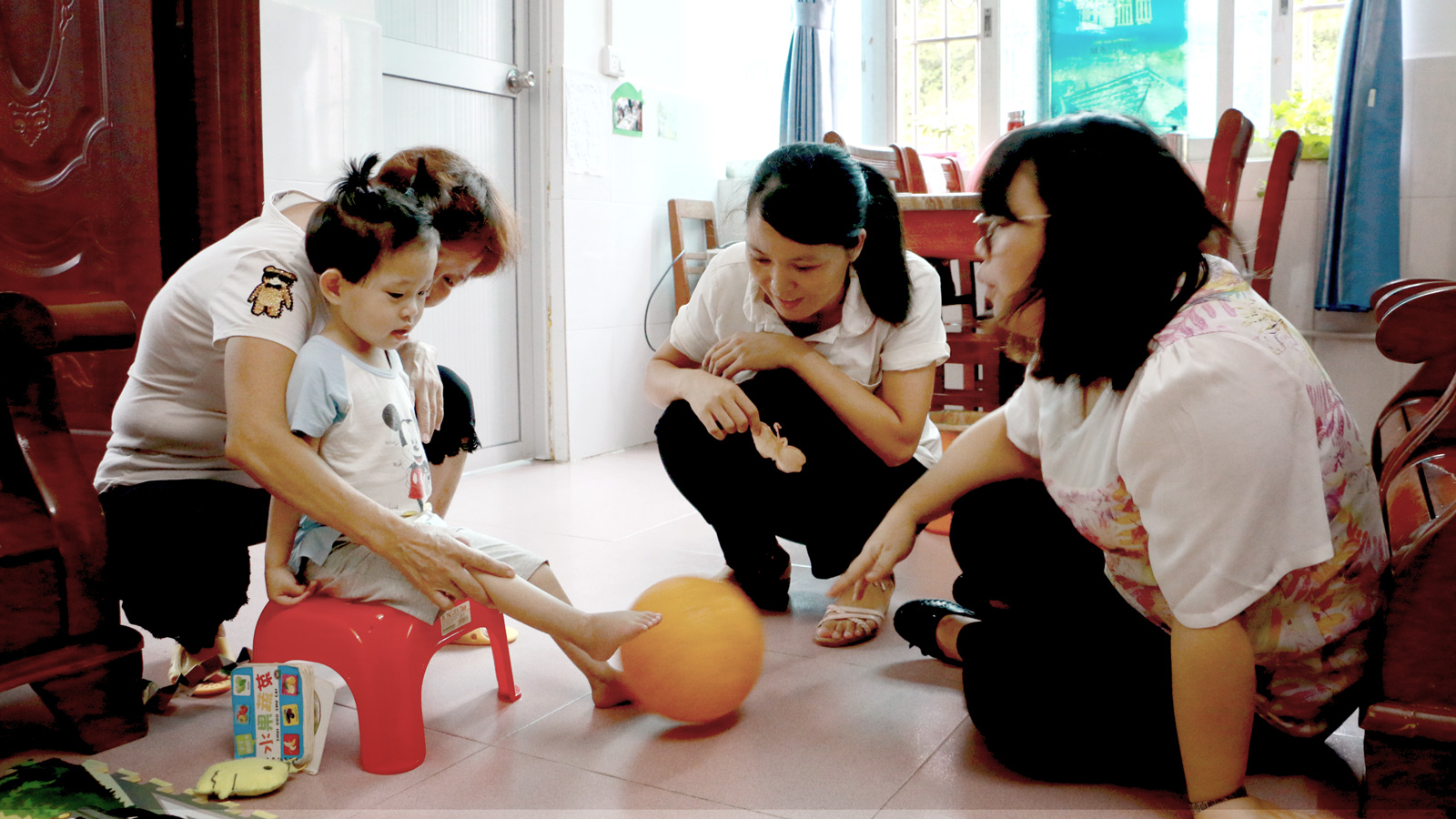 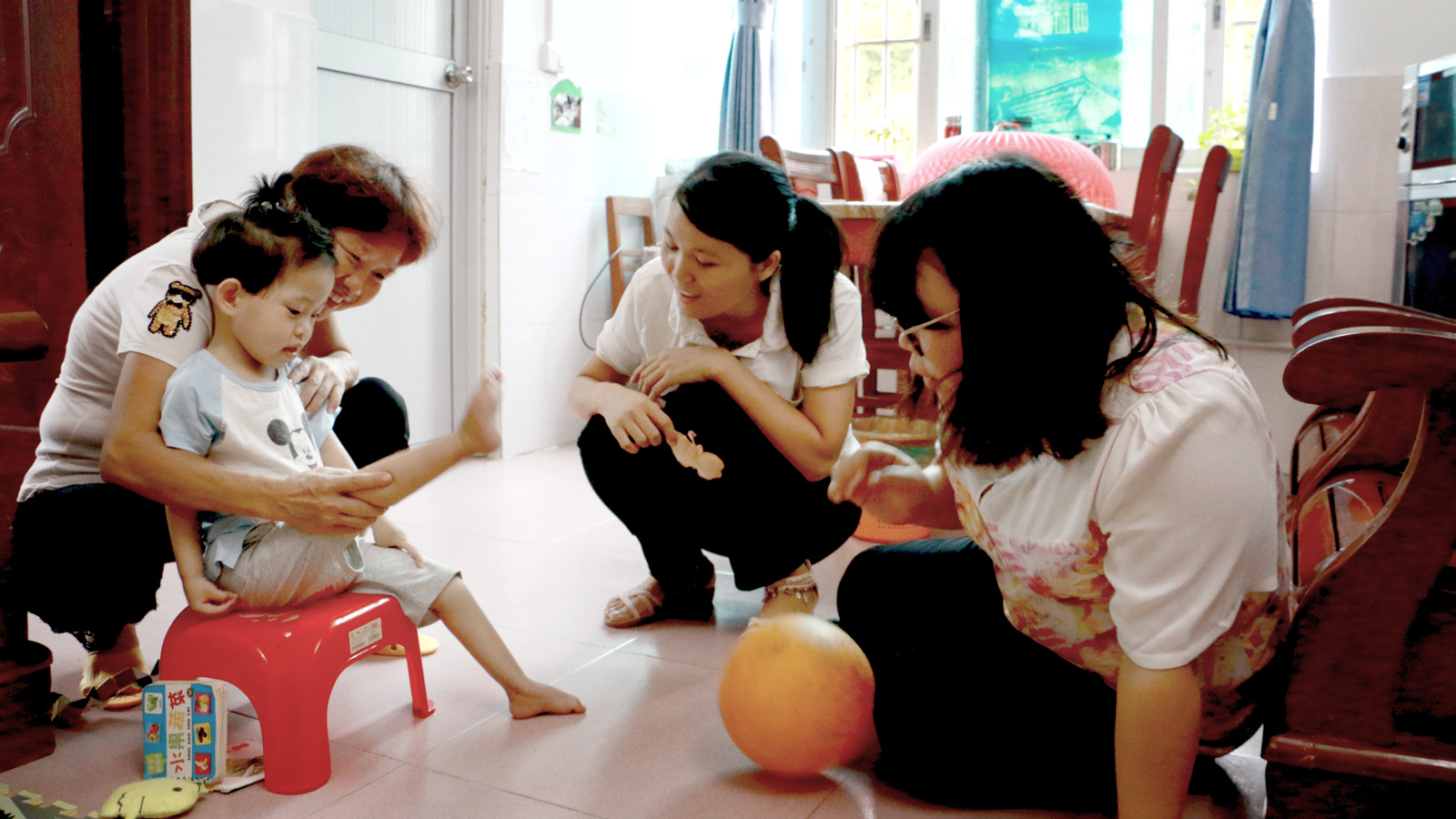 Zhao then demonstrated two more of the favorite activities she and Anjing had enjoyed together. She gave Anjing balls with two different colors and helped her name the colors. Then she asked Anjing to throw the balls to her one ball at a time. “Come on, Anjing, give me the red ball!” Anjing used all of her strength to throw the correct ball back to Zhao. Zhao praised Anjing, kissed her, and threw the ball back. Then they played together on the mat. Zhao placed Anjing’s chosen toy a little out of her usual reach so when she stretched to grab it, she would be strengthening her upper and lower limbs. 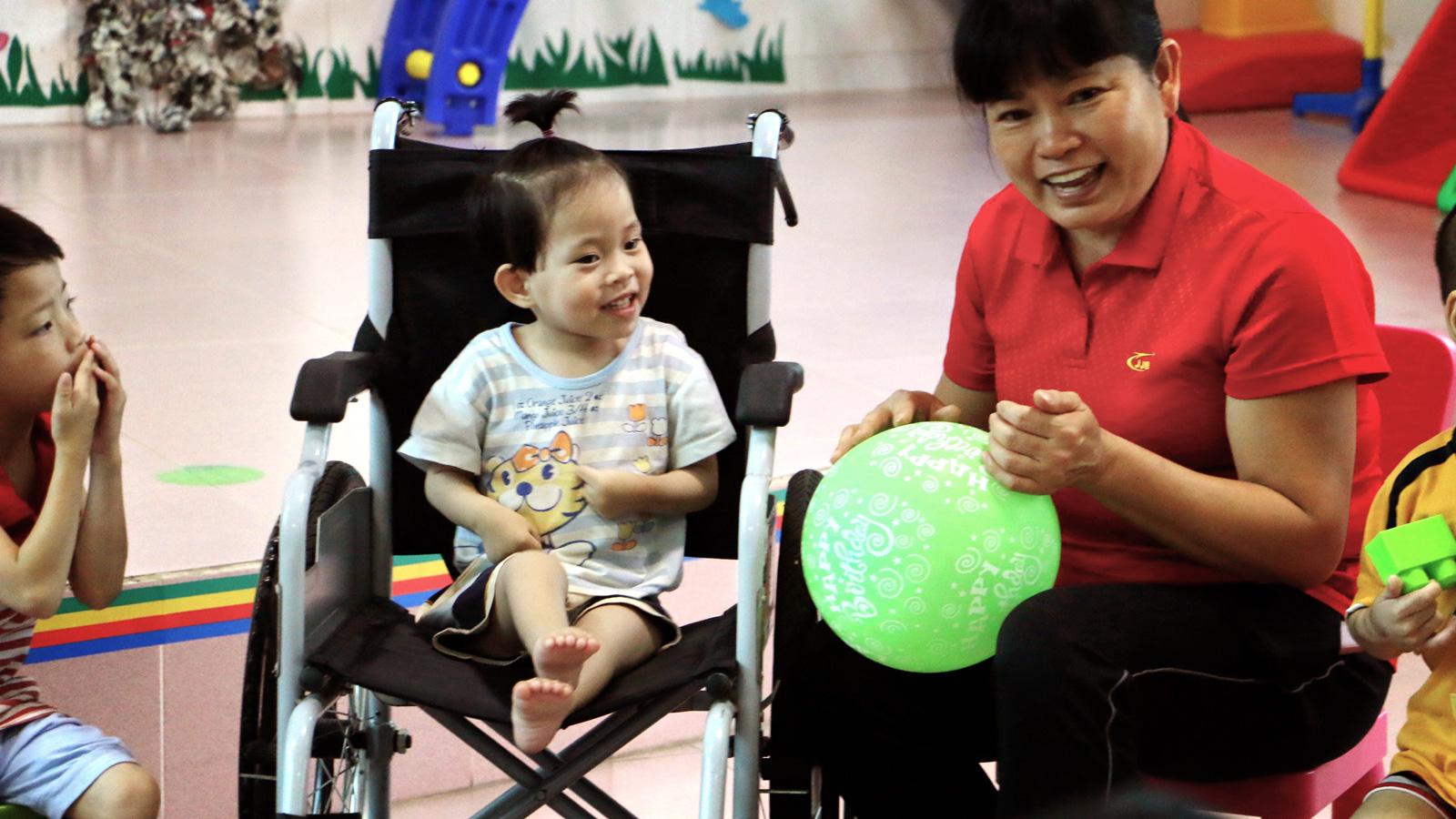 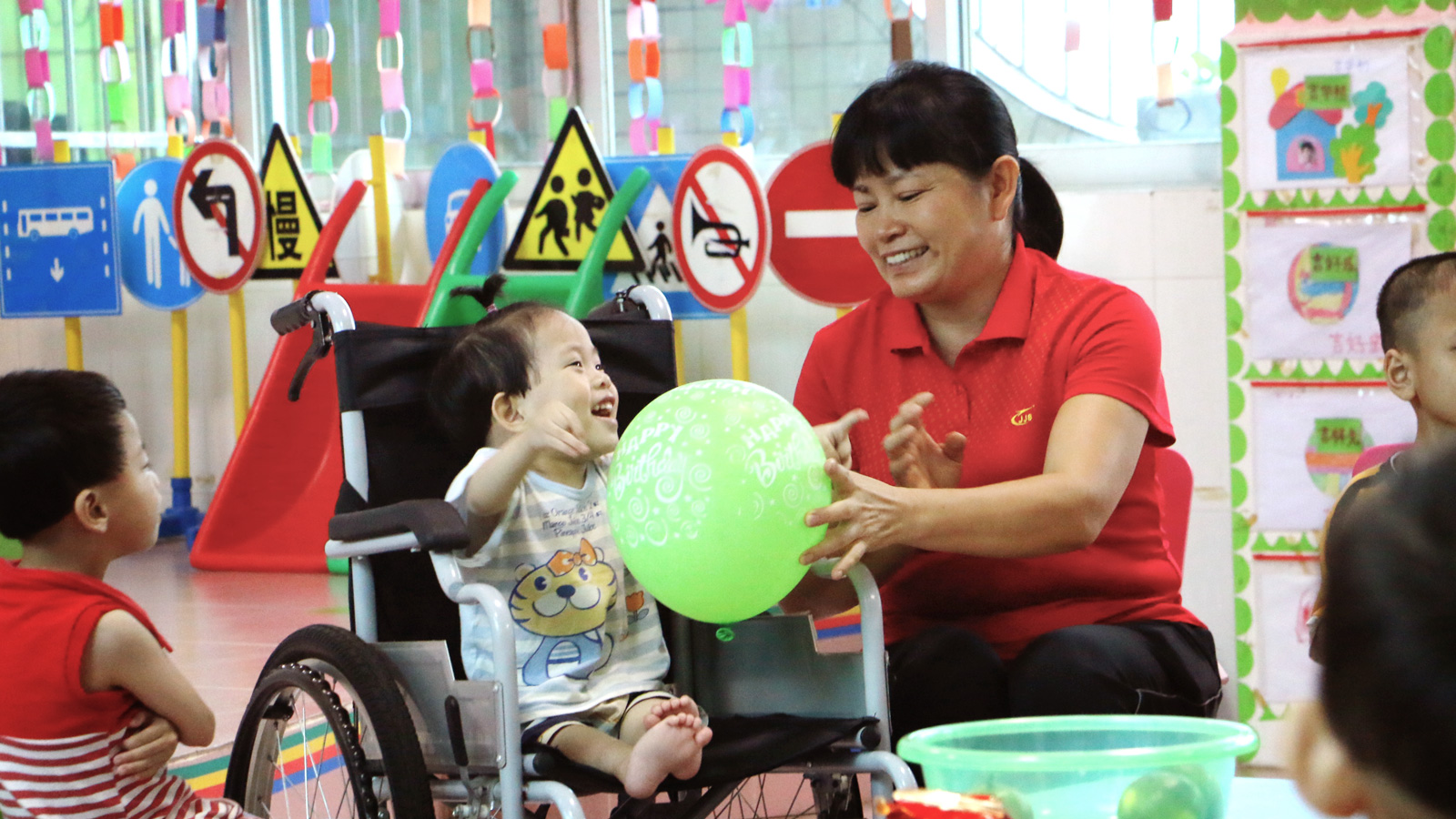 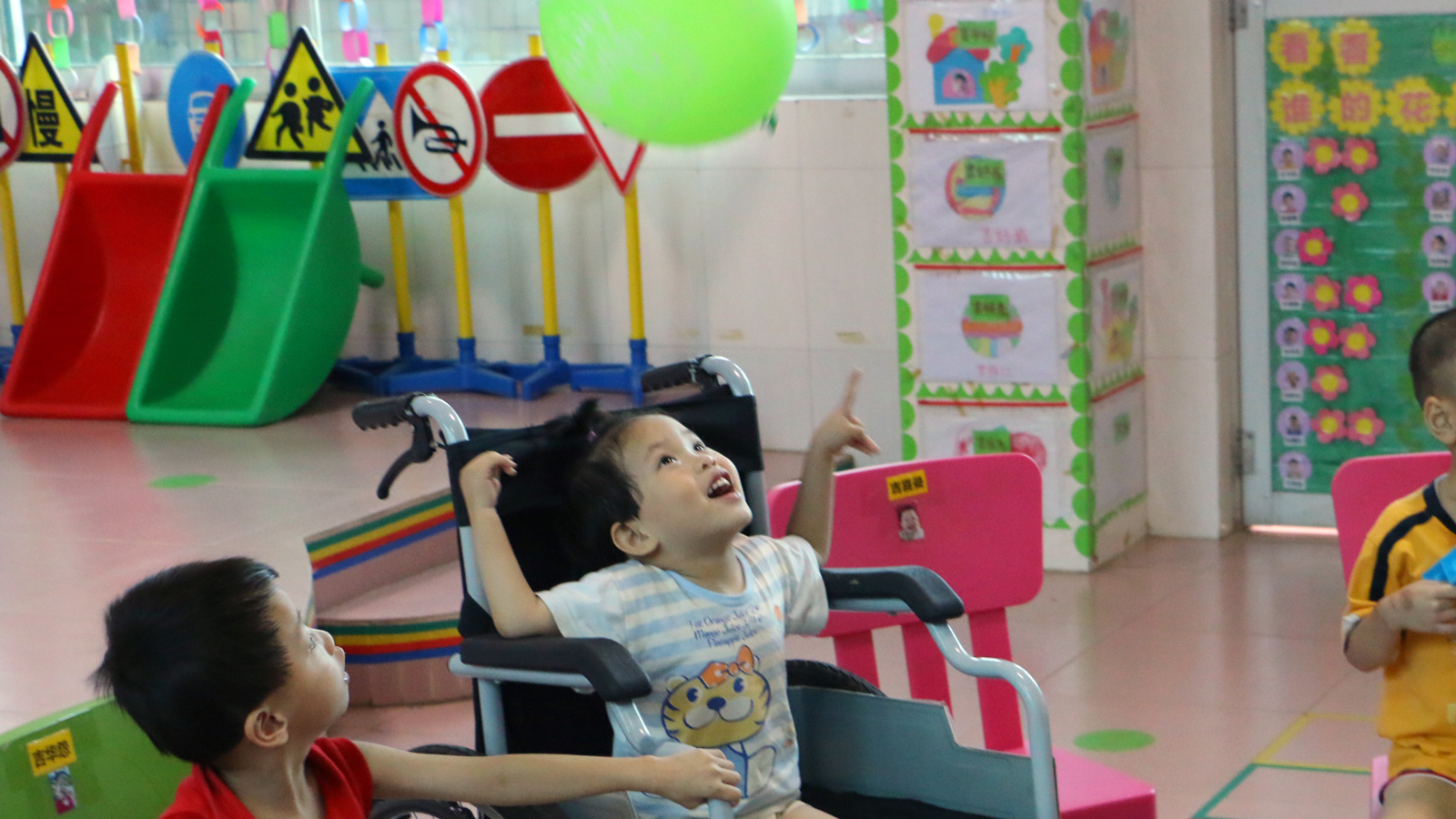 After Zhao left to go back to her job at CCCH, Anjing, though still shy, became more and more comfortable in the classroom and more and more verbal. Once Li gave Anjing a picture book that included a big photo of corn on the cob. “What’s this, Anjing?” “Corn!” Anjing answered. “Can we eat corn?” “Yes!” Then she put the picture next to her lips, “took a bite of it” and also gave Li a bite. “Tasty, isn’t?” said Li. Anjing responded proudly, “Yes!” 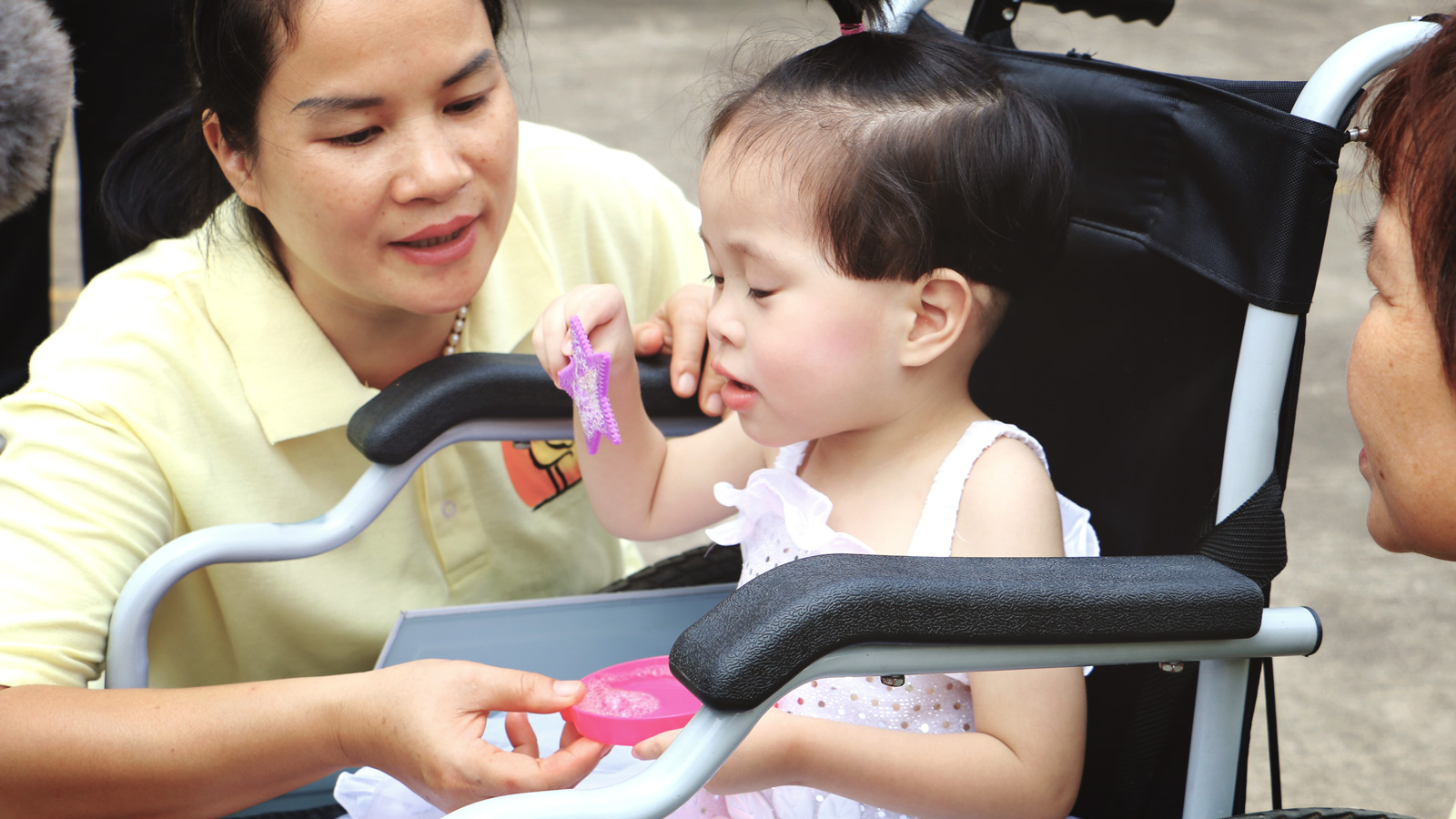 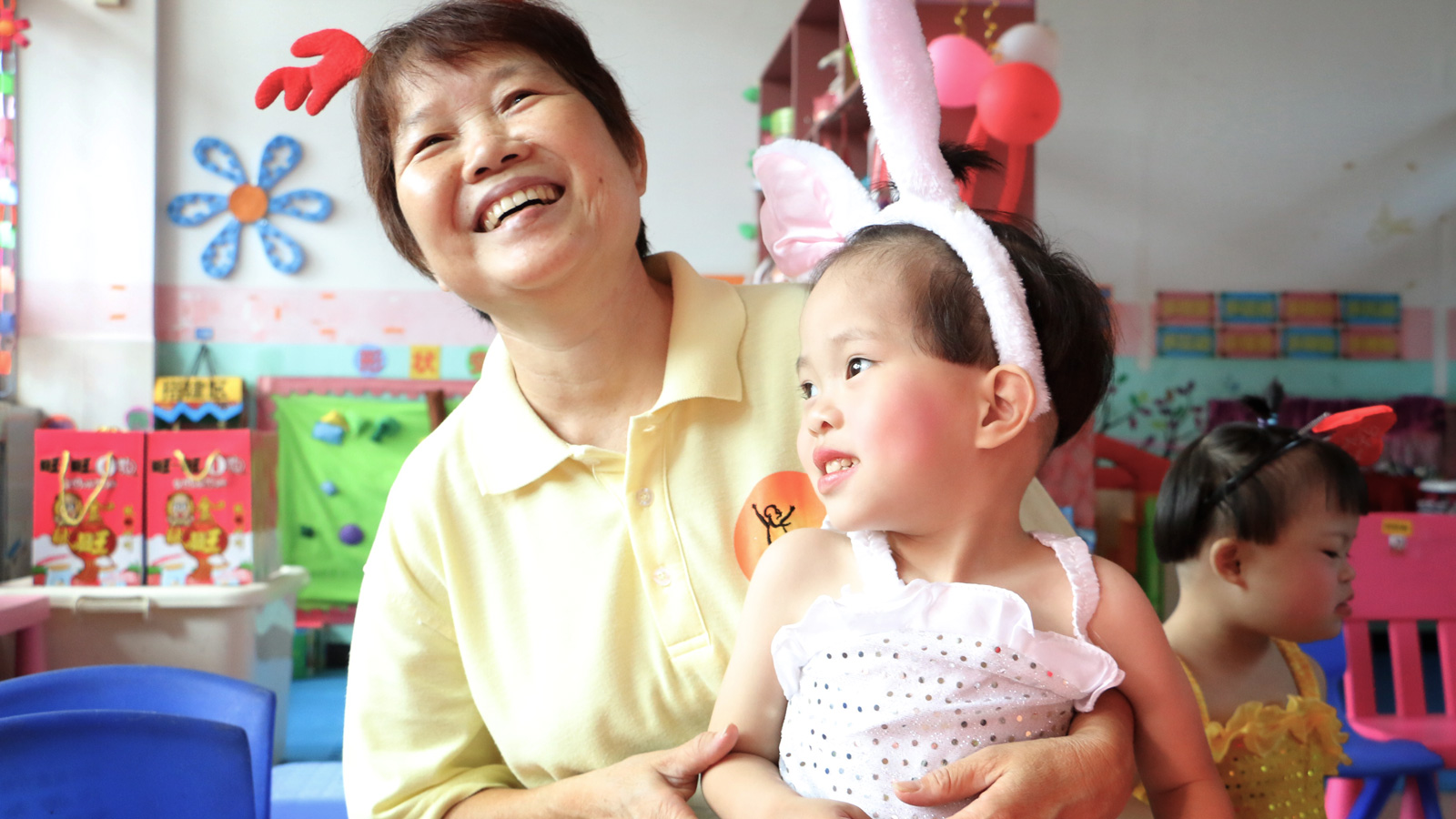 Still, when Li leaves the classroom, Anjing cries a lot, probably because she worries that she will have to separate from Li as she did from Zhao. The program staff believes that Anjing needs the security of living in a family, so she will soon be enrolled in OneSky’s Loving Family program where, for the first time in her young life, she will have a mom and dad of her own.

A Village Teacher — “Everybody’s welcome in this classroo...

Investing in Our World’s Most Vulnerable Children
Scroll to top